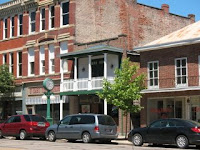 Lunch time travels. You migh not think of going to lunch as traveling; but it can be. My Dad and I traveled about 50 miles to take care of some family business (dealing with my Mother's Death), and had lunch here, Cross Keys Tavern. We ventured there because my cousin works there. However, once there I became fascinated with it, love historic places, old buildings and often wonder when they were built, what happened there etc. I knew from an old photo this was an historic building in downtown Chillicothe. Chillicothe was the state's first capital and is filled with historic happenings.

Currently, it's an Irish Pub with live music. Dixieland music some nights. In fact it holds a bit of a record. After some research here on line I found that it has the 2nd longest continuously playing house of Dixieland music in the country! It's been a tavern since the early 1900's. I asked my cousin what had been upstairs, she laughed and said maybe a bordello. Don't know if thats true, more research is needed. The tavern is on the ground floor, the upstairs I was asking about is where you see the white porch area.

The Goosetown Astonishers is a band in it's 35th year. The name alone tells some history of the area. Chillicothe has a very strong German history. The Goosetown Astonishers was a name of one of the early newspapers, if memory serves me correctly--the one that was written in German. Much of the states early German immigration began in Chillicothe. Many of the houses still show evidence of that influence.

This tavern has been investigated by The Buckeye Paranormal Society. The locals site evidence of ghost activity, primarily in the basement area. Locals say "Harold" makes noise, breaks glasses, turns on and off lights. One story supporting the possible reason for this is a man was murdered behind the tavern in the small ally. Though no one knows when, or why or even what the name of the man murdered was, the ghost has been given the name of Harold. Many of the old downtown buildings in Chillicothe are connected with a series of underground tunnels dating back to the 1800's which this building is or was a part of. Perhaps something happened in those tunnels and thats the cause of higher activity in the basement. Perhaps it's due to the underground railroad?

The Cross Keys Tavern is located at 19 E. Main Street in Chillicothe, serves daily lunch specials of good homemade food. Many of Courthouse employees eat lunch there, as it's just across the street. Years ago I read where someone was hung in front of the courthouse, where the sidewalk now is. I believe it was the States' first hanging.

I've traveled and had lunch here at The Cross Keys twice. I highly recommend it.
By Sandy at July 17, 2009