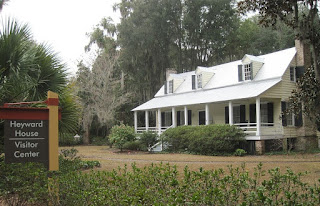 The Heyward House, Visitor Center, in Olde Town Bluffton.  This house is one of only 15 buildings that survived being burned in 1863 by The Union.  But, let's back up a bit.  Bluffton is an easy day trip for anyone visiting Hilton Head Island.  It's about 8 miles one way, around 15 minutes depending on traffic.  Bluffton is situated on the May River, has bluffs over looking Glenn Cove, Heyward Cove, Huger Cove, and Verdier Cove.  You get the picture of lots of water.  Bluffton was once a summer place for the rich and famous.  Though plantations were vast holdings of land and typically worked by slaves, the land owners apparently still needed to "get away".  The area, the low country wasn't the nicest or easiest place to live with rats, mosquito's, alligators and the like.  The very weather and swampy conditions that could make a white plantation owner wealthy were also the very conditions that were hard on his family.  Yellow fever was a constant threat in the low country.  Wealthy families "summered" elsewhere while their plantation overseers and slaves worked the land back on the plantation.  Bluffton provided cooler breezes being on higher ground,  protection from the mosquitoes, rats, and alligators, and transportation for goods with the water ways.

Because the rich land owners gathered here many political discussions took place.  Now we all know South Carolina is where the Civil War began, but Bluffton, not Charleston is probably where the talk of secession took hold first.  Discussions about secession took place as early as 1844.  When war did in fact break out, and Hilton Head Island and Beaufort were occupied by The Union families vacated Bluffton.  Bluffton was utilized by Confederate Pickets as a base to spy on Union activities. 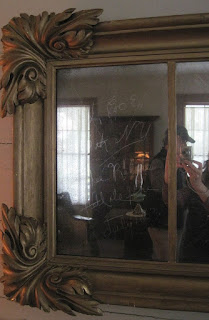 The house was originally built as a summer house for John Cole and is the 4th oldest structure remaining southern Beaufort County.  Guided tours of the house are available, as well as free maps of a olde town walking tour.  This old elaborate mirror is signed by a Union Soldier from New York.  Though it's hard to read, it gives the date of July 12, 1863.  I can't make out the name, and sadly I don't remember it, but you can read it's Company E 6th NY. 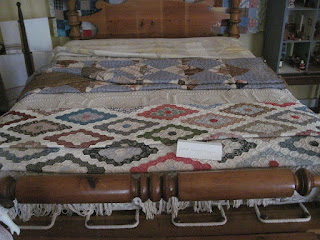 Much in the house is in fact original.  Beautiful quilts. 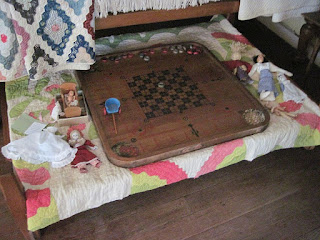 A game that looks similar to checkers. 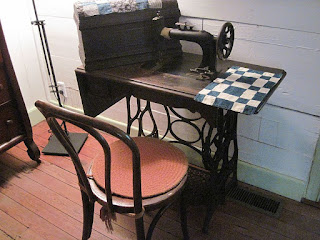 A singer sewing machine.  This one is much smaller then an old treadle machine I have. 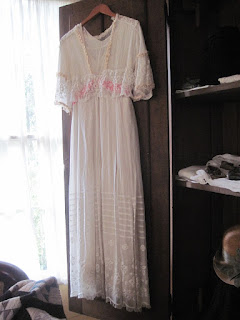 A beautiful wedding dress.  You may not be able to tell from the picture, but when you stand next to it, you realize how much smaller women/people were in those days. 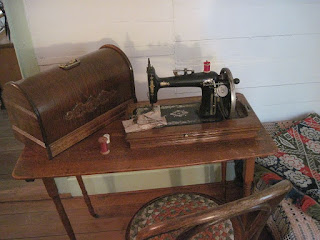 This 2nd Singer predates the treadle.  It's in fabulous condition and you see the carry case even.  Can you imagine the skill it took to crank the wheel with one hand while using the other hand to feed the fabric through the machine? 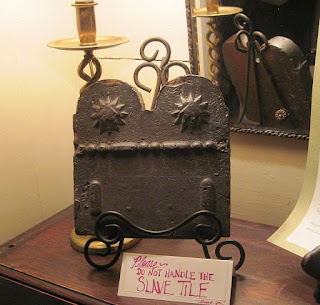 I don't recall seeing Slave Tiles before this tour; but our tour guide said we probably had but they might not have been discussed, or labeled.  Tiles were hand made by slaves and unique to that property.  While on a tour in Savannah, we saw an entire building made from bricks from slave tiles.  These bricks are very expensive and highly sought after. 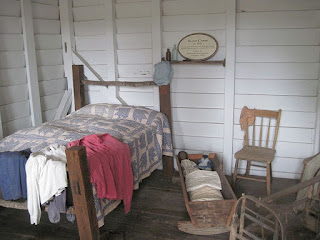 A slave dwelling remains on property.  Records indicate this slave dwelling was probably built before the main house and used while the slaves built the main house.  While not the smallest of similar dwellings I've seen on tours in The South, you wonder how many people lived in this one small room. 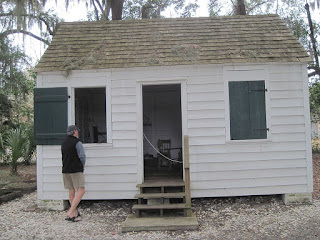 The name Heyward, has a huge presence in South Carolina.  You see streets with the name, we've toured plantations where Heywards lived, and other large family homes.  Prominent family members graves are scattered about The Hilton Head, Charleston, Beaufort area.  As you travel around the low country "rich" takes on a how different picture.  The wealthy plantation owners owned so much, houses and land here there and everywhere it seems.

Thomas Heyward was a signer of The Declaration
as well as The Articles of The Confederacy.
By Sandy at February 08, 2013