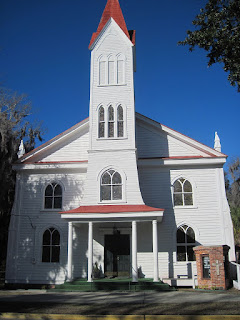 The Historic Tabernacle Baptist Church in Beaufort, South Carolina has a small a historic graveyard to the right of the church as you face it, in a picturesque courtyard.  The church was formed by Black Members when the area was evacuated in 1861 due to Federal Occupation. 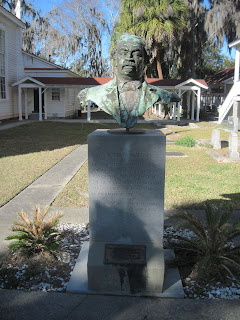 A Memorial to Robert Smalls is present as you enter the courtyard and graveyard.  A quote by Robert Smalls reads, "My Race needs no special defense.  For the past history of them in this country proves them to be the equal of any people any where.  All they need is an equal chance in the battle of Life.  Dated Nov 1, 1895. 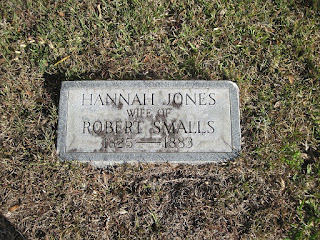 Hannah Jones was a maid at a hotel in Charleston when Robert met her.  He was born into slavery on April 5th 1839 in a slave cabin behind the main house (located at 511 Prince St) of Henry McKee.  Henry McKee owned his mother Lydia Polite.  It is presumed Henry fathered Robert, some records list him as a mulatto, though pictures show him to be quite black.  Robert owned by Henry  and was leased out to businesses in Charleston when only 12.  It is during that occasion that he met Hannah.  As a slave he spent a good deal of time in Charleston harbor and had many jobs.  He worked on the docs and learned to make sails among other jobs.  Ultimately, he became a pilot; though being Black wasn't given that title..that is the work he did.  He became quite good at it and used those skills to free himself and Hannah and their children and others.  He was on The CSS Planter, a Confederate ship when the 3 White Captains and Pilots decided to spend their evening on shore.  On May 13th, 1862, he commandeered the ship and sailed it safely past 5 Confederate Forts.  On board were 4 large artillery pieces and along with an important coding book.  He was able to use the correct codes in order to appear to be a Confederate and thus wasn't questioned as he sailed to freedom and turned the ship, it's code book, and artillery over to Union Forces. 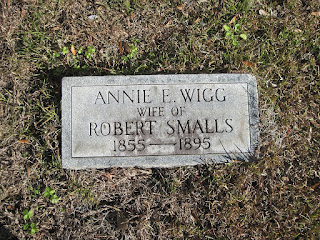 Though I didn't read any accounts of a 2nd marriage, it seems his 2nd wife, Annie is also buried in the quaint historic church graveyard there in Beautfort.

After the Civil War, Robert Smalls returned to Beaufort and purchased the house at 511 Prince Street from his previous Master, Henry McKee.  His Mother, Lydia lived her remaining days with him there as well.  Robert was a successful business man, and was elected to The South Carolina State Legislature, and United States House of Representatives.    It is because of him, that Blacks were admitted to fight on the side of the Union forces.  He was also instrumental in the formation of the first free and compulsory public school system in the country.

After the compromise of 1877 when Federal forces were withdrawn from the area, he was convicted of accepting a $5,000 bribe by Southern Whites in one of the many efforts to reduce power and respect of Blacks in the South, but was pardoned in a deal which also permitted charges of voter fraud by Democrats to be dropped.

What a remarkable man.  I encourage you to take the time to visit this historic church and graveyard.

**Carol Kilgore, I've been unable to visit and leave comments on your blog because of google+.  You may not be aware of your settings, but it seems things have changed and now ONLY people who join google+ can blog with you.  I know there's a fix, as others have done it.  An hopeful you'll see this post and leave a comment.  Happy to put you back on my blog log, since we enjoyed visiting back and forth during the a-z challenge.  AND perhaps someone who is google+ will see this and let you know how to fix it**

Pop in Often, remember Menu Mondays for dining tips, Traveling Tips on Thursday, and any day for vacation destinations.
(C6, RT6)
By Sandy at May 11, 2013