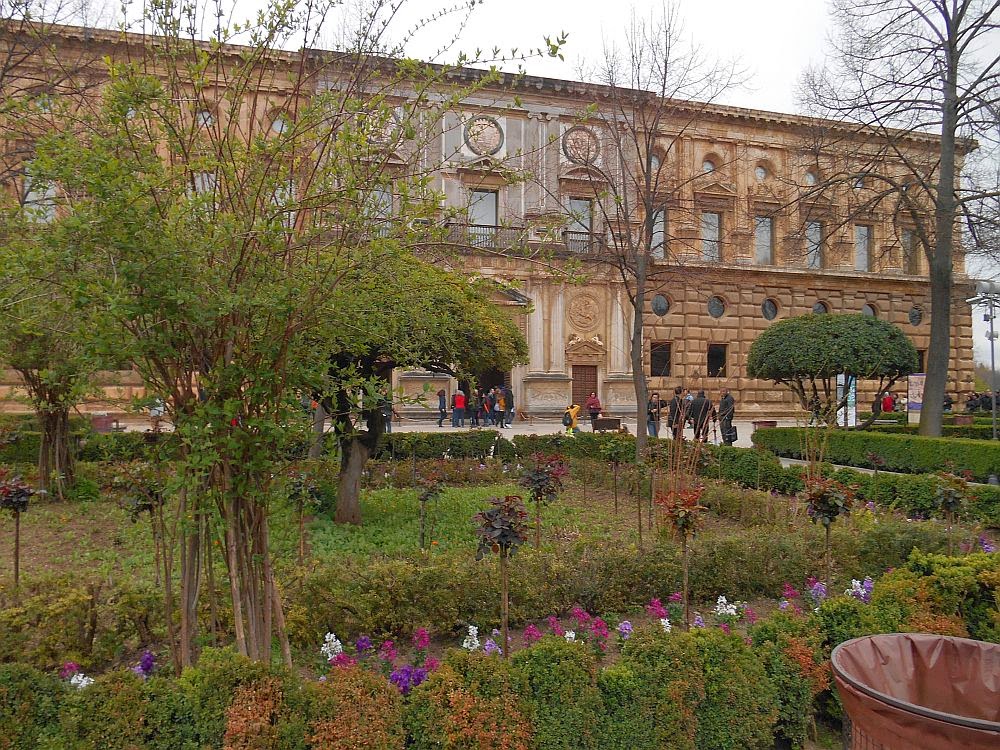 Palace of Charles V.  Which we did not get to see when we visited La Alhambra in Granada, Andalusia Spain.  Purchasing tickets for La Alhambra, a UNESCO World Heritage Site and one of Spains major tourist attractions is a bit of a feat.  Though we had pickets for the whole area, entrance into Nasrid Palace is time stamped.  Nasrid Palace is the main attraction there so you're told to make sure you're there on time, then view the other areas.  We had been told by multiple people if you show up 5 minutes late, you will not get in.  So, we passed by Palace of Charles V. 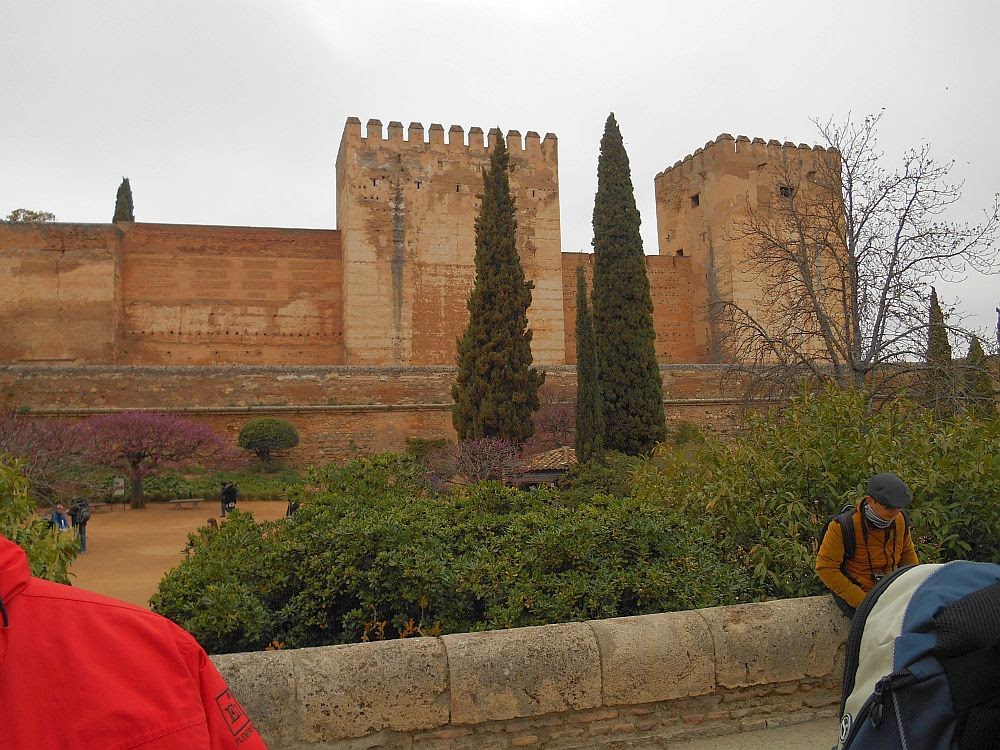 We had arrived a good hour ahead of time, but the queue to pick up our tickets (even though we had purchased them almost a year ahead of time) was HUGE.  You walk from one of the many parking areas, to get in line to either purchase your tickets or pick them up at will call.  The line for will call didn't move much faster then the line to purchase.  However, they only sell a certain number of tickets each day, so you risk being turned away by not purchasing ahead.  Once through that line, we headed to the area to buy (you must in addition to the ticket price), our audio tours. 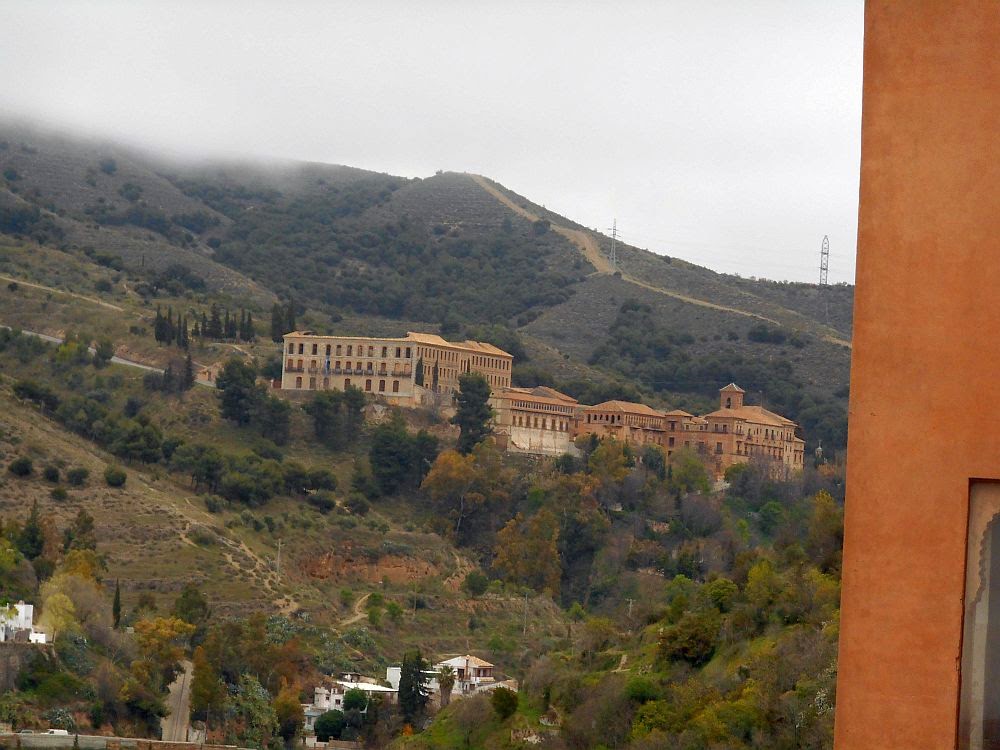 La Alhambra is a medival complex, a fortress, and a palace and amazing Islamic Architecture.  It's a Royal Complex that's been around in part from 889 ...the 9th century when Sawwar ben Hamdun built a small fortress there on the hill top.  This is a view out one of the windows of The Nasrid Palace at one of the surrounding Palaces. 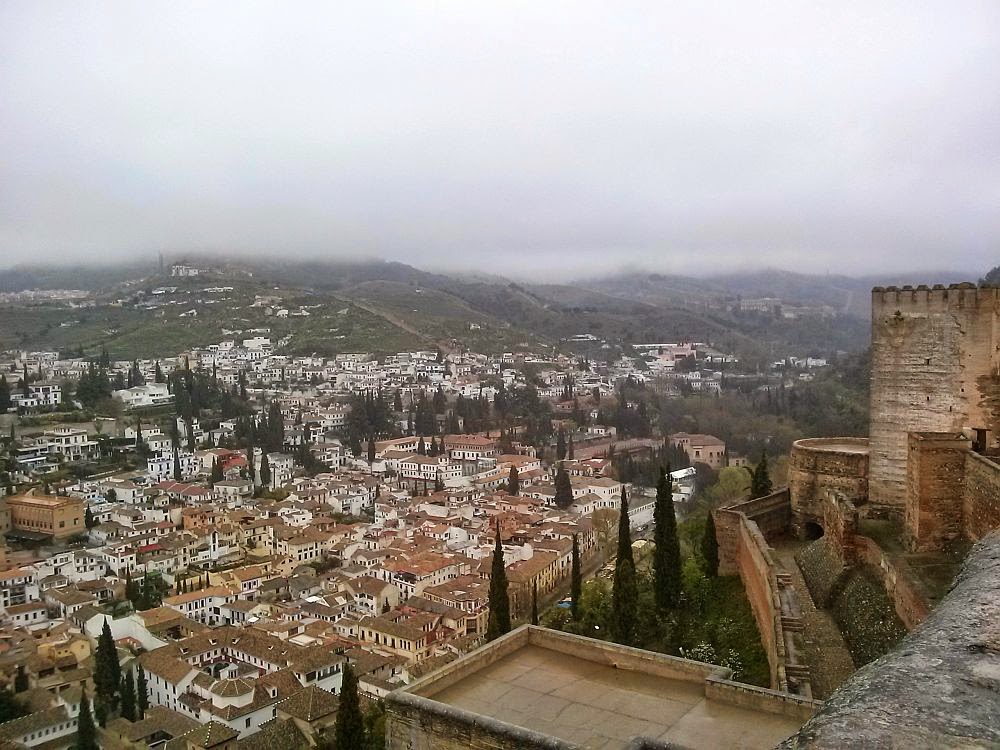 You can see it was pretty cold the day we toured, and then it got colder and rained which hampered our seeing much after existing the Nasrid Palace.  This is the view of Granada below in the valley.  Off to the right you can see part of fortress, the walls and walk area. 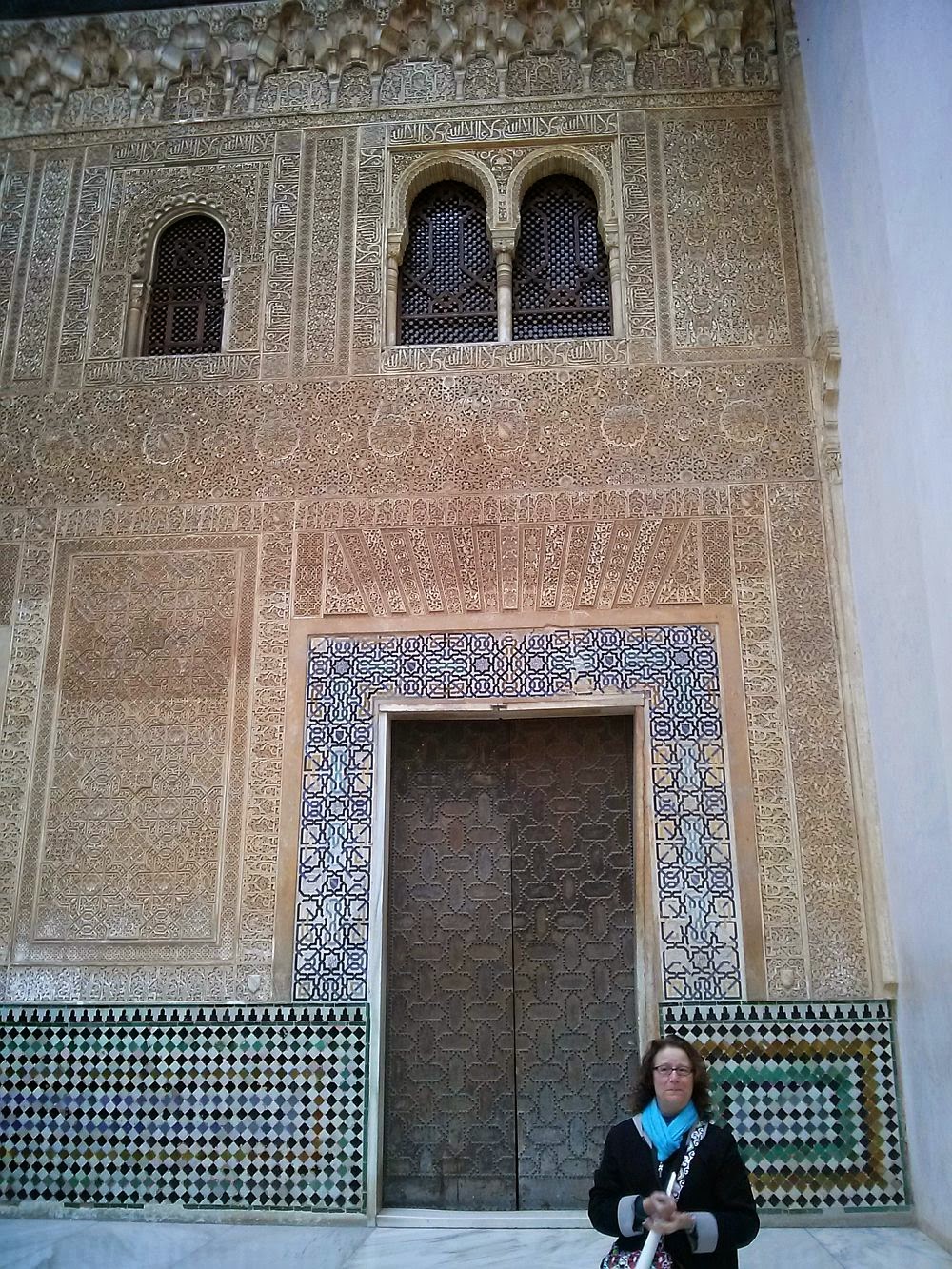 Thankfully the Marriott Concierge told us it would be 10-20 degrees colder there even in nice weather due to the altitude so we did dress warmer.  Seeing me just in front of one of the doors gives you a feel for the enormity of The Palace.  Look at the awesome detail and colorful tiles of the Moorish Architecture.  The small fortress that Sawwar ben Hamdun built was for protection and ultimately it became not much more then ruins.  Then in the 11th century,the Moorish King  Mohammed ben Al-Almar rebuilt and renovated it.  This was The Kingdom of Granada. 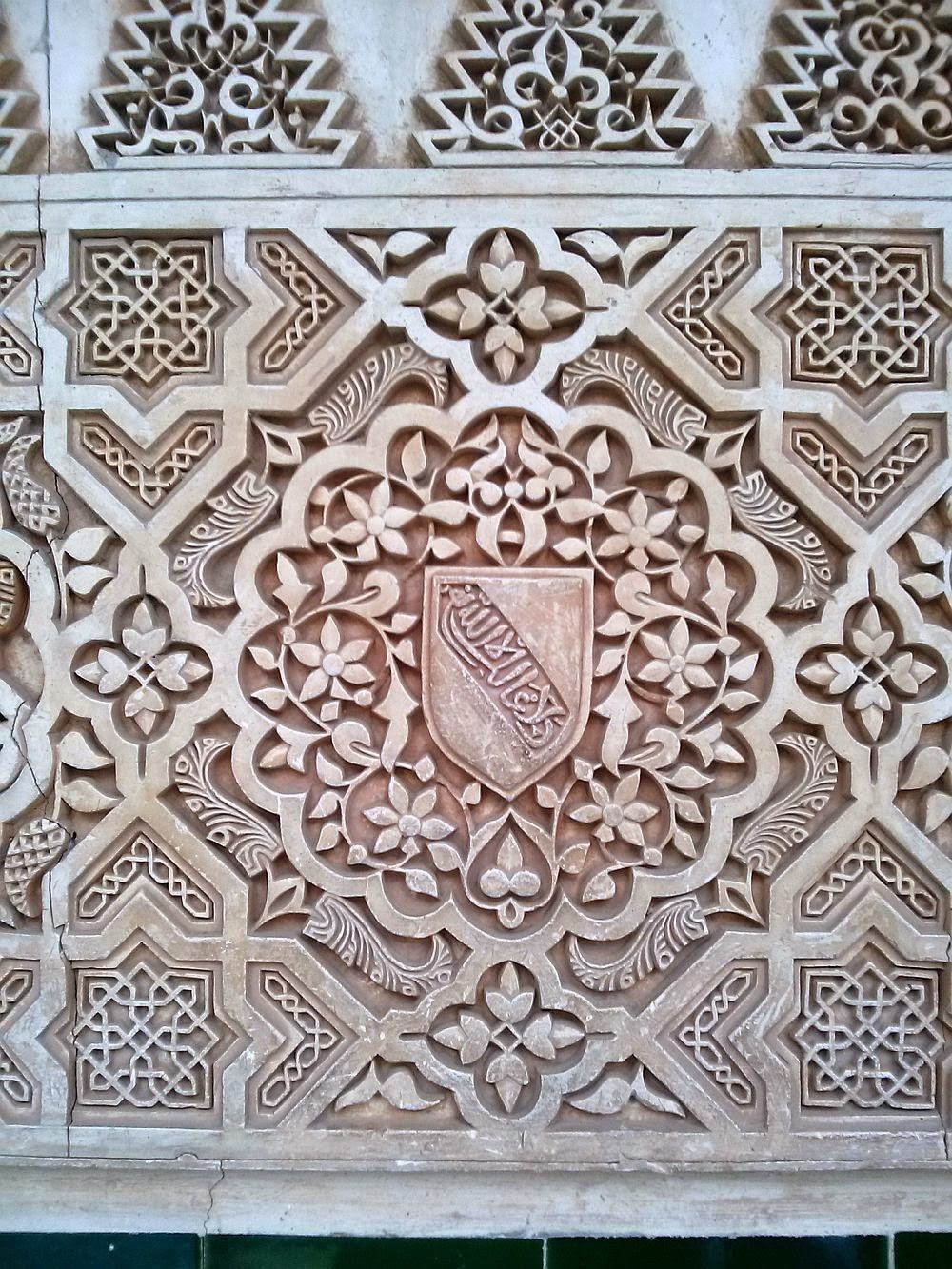 A close up of some of the beautiful details.  We were told there are both Christian and Muslim tributes in the carvings throughout the Palace.  At times the Moors were here, and times Christians. 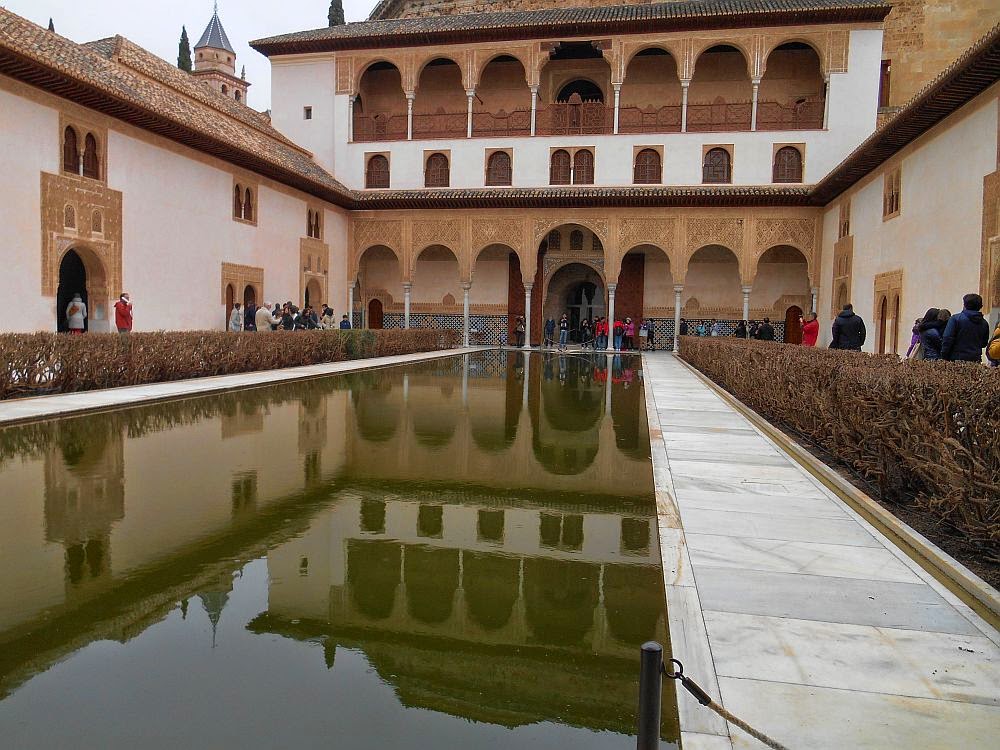 I imagine this is quite beautiful in summer when the bushes are out and the flowers blooming.  Many areas opened onto this beautiful courtyard.  More building, additions and renovations took place when Yusuf I, Sultan of Granada made this his royal palace in 1333.  He was responsible for the most of the additions. 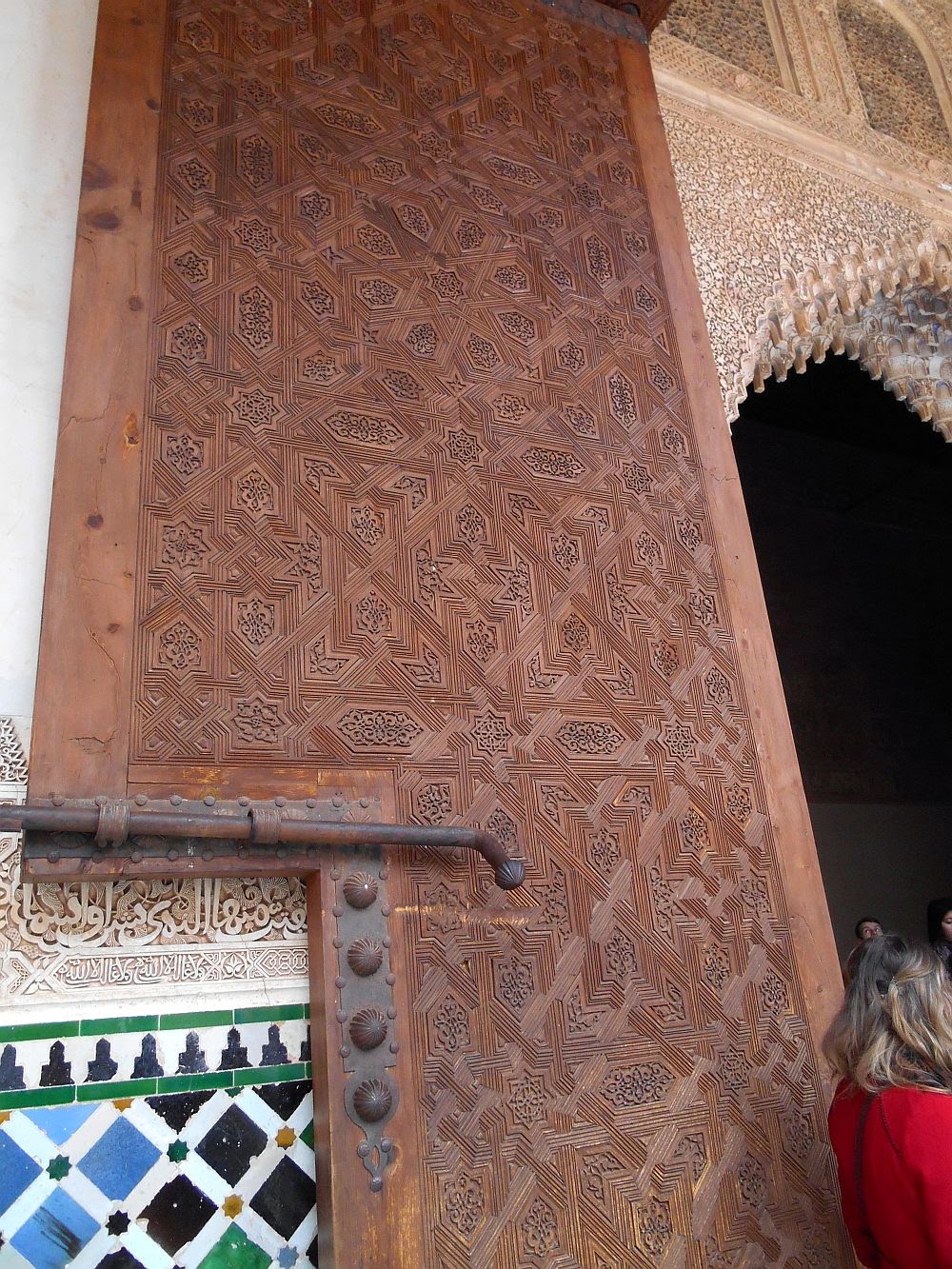 In 1492 after The Reconquista, Catholic Monarchs were in control of the area.  Though Christian symbols were added and some changes made, they didn't destroy and rebuilt.  They thought it too beautiful and so Cathedrals were often built inside, or on top of Mosques throughout Spain.

Notice this large door, the door has a door within the door.  The brass bar you see is a more normal size door to let people in and out vs opening this large very imposing door.  Perhaps it was to attempt to keep out the elements?  It's high on the hill in area more mountainous then other parts of Spain and so by nature is colder.  There were no heat sources.  I posted about the 1 and only fireplace, take a look HERE 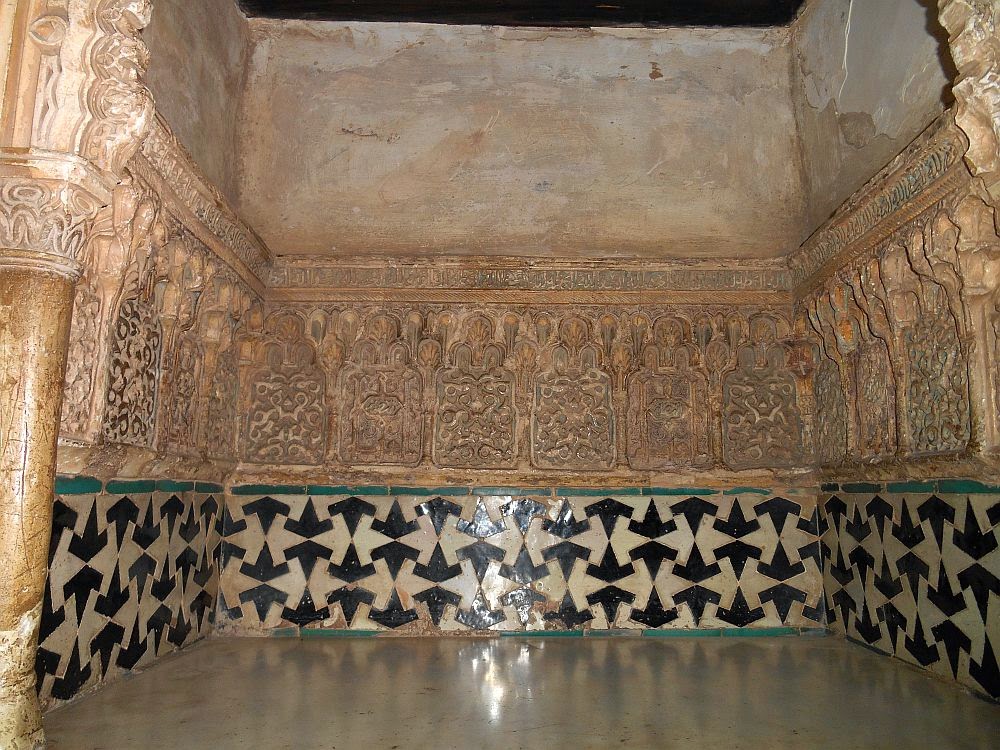 One of the beautiful rooms..so much color and detail.  Truly is hard to take it all in. 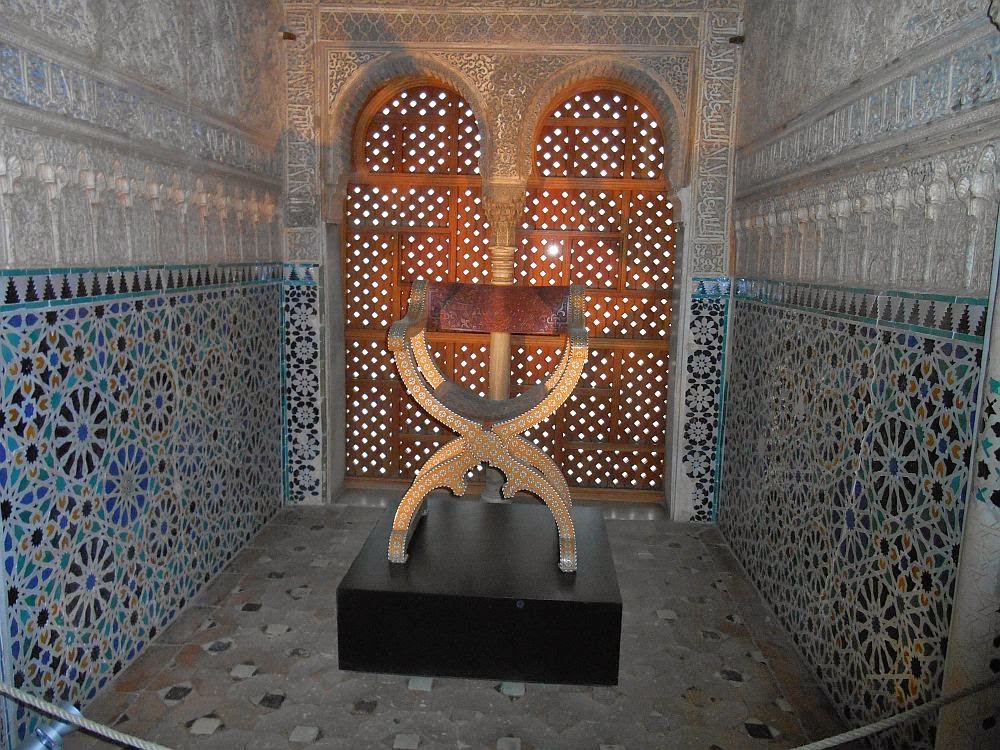 In 1527 Charles V, Holy Roman Emperor lived here and built his castle within the Alhambra. 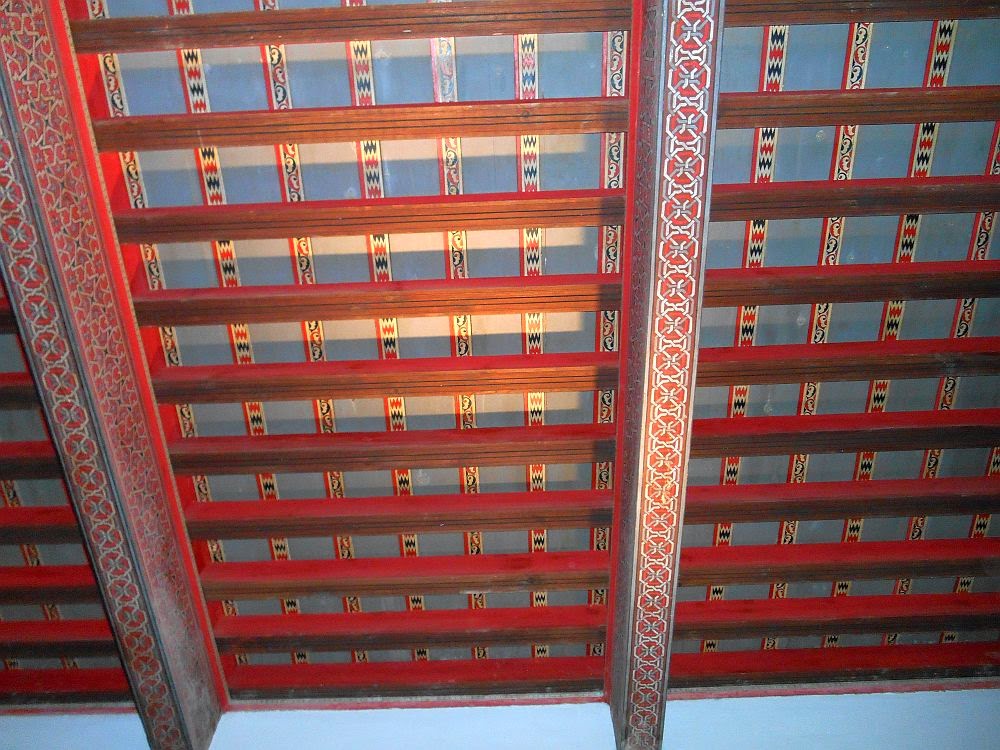 This is a ceiling that was particularly colorful. 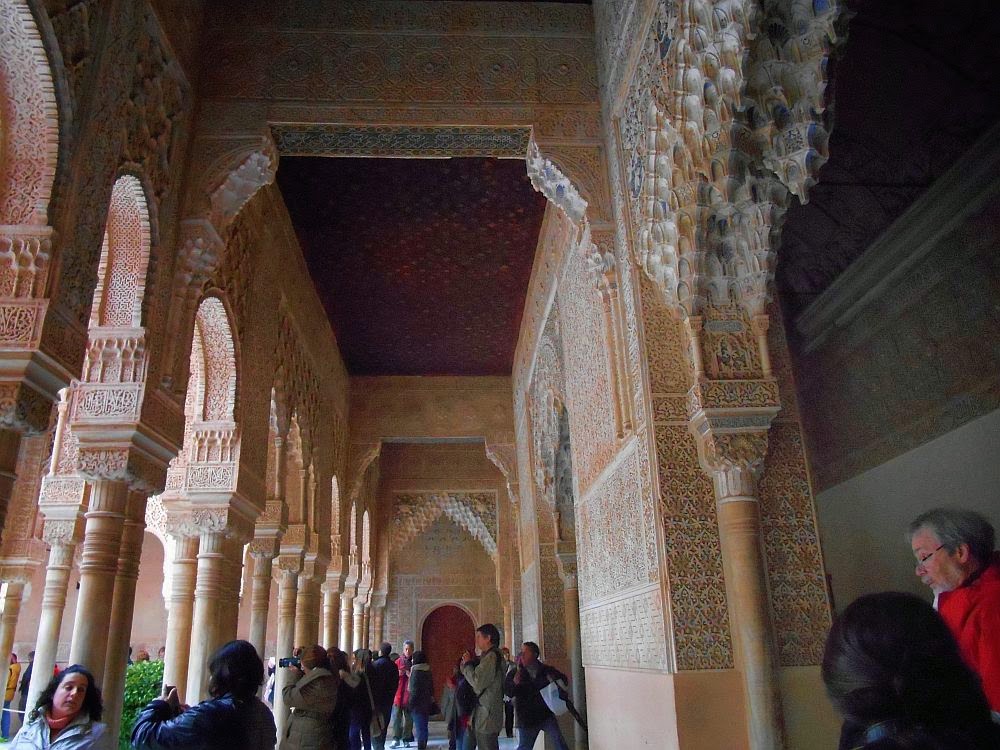 Looking up at the color and detail again...and the columns and arches.  Truly breathtaking. 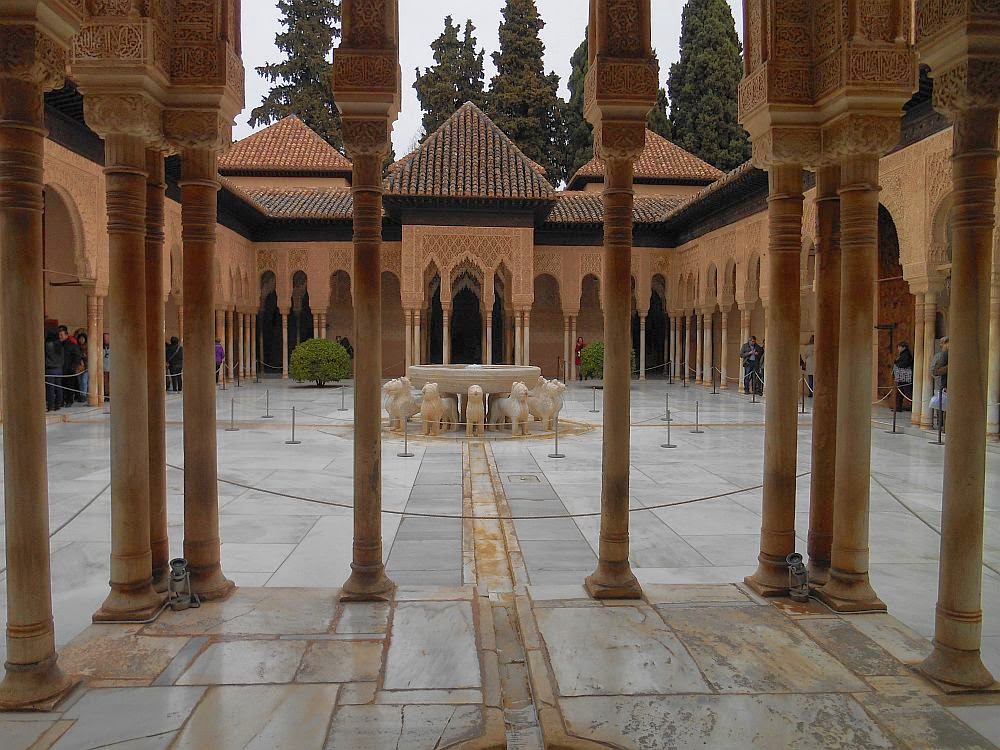 The Alhambra once again fell into disrepair and was virtually forgotten until it was rediscovered in the 19th century by European Scholars.  Restorations began and continue.  This is The Court of the Lions.  Water, fresh water came out of their mouths, and notice the trough of water in the center of the marble floor.  Water was pumped up the hill. 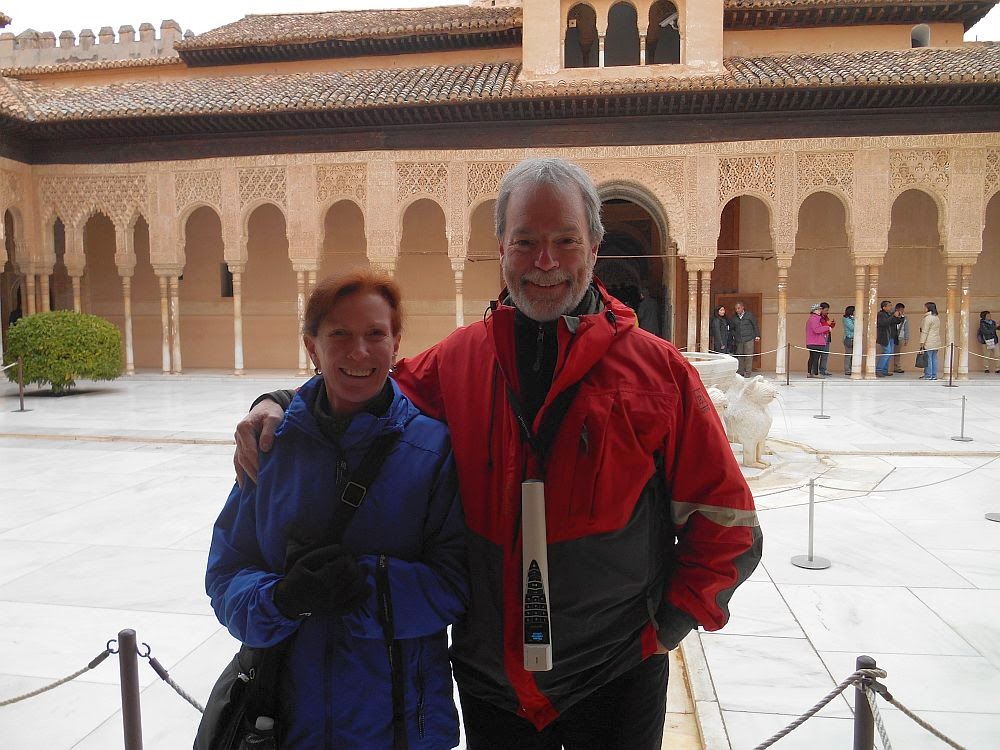 The Court of the Lions was a favorite photo spot.  Our Dear Friend Jane, and Hubby. 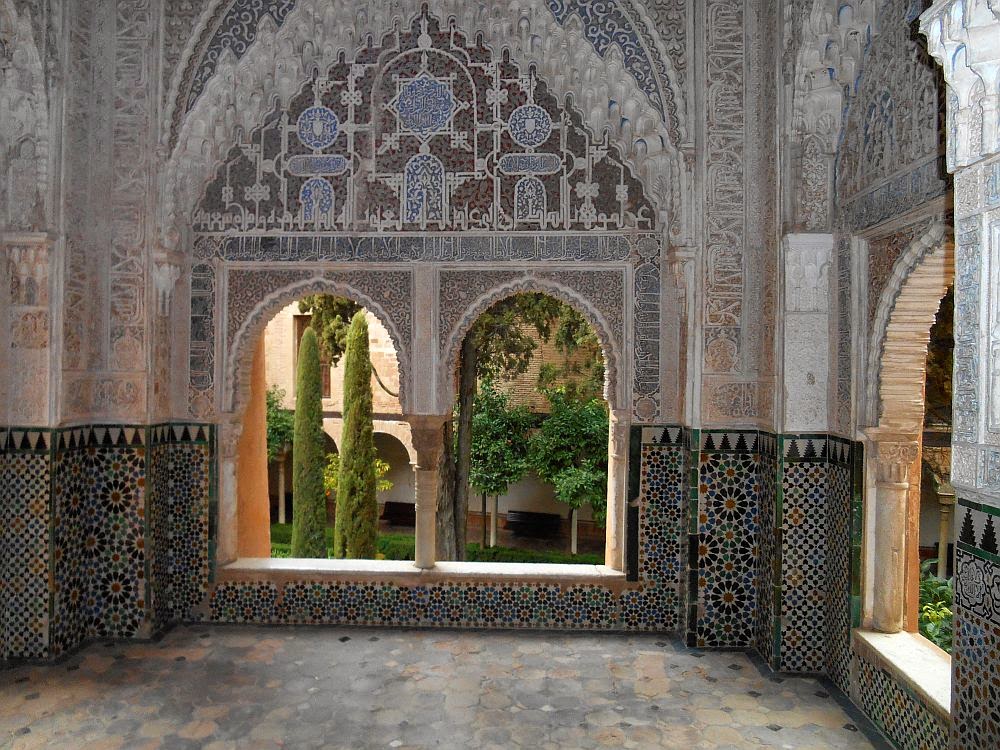 More color, and more color and through the arch windows 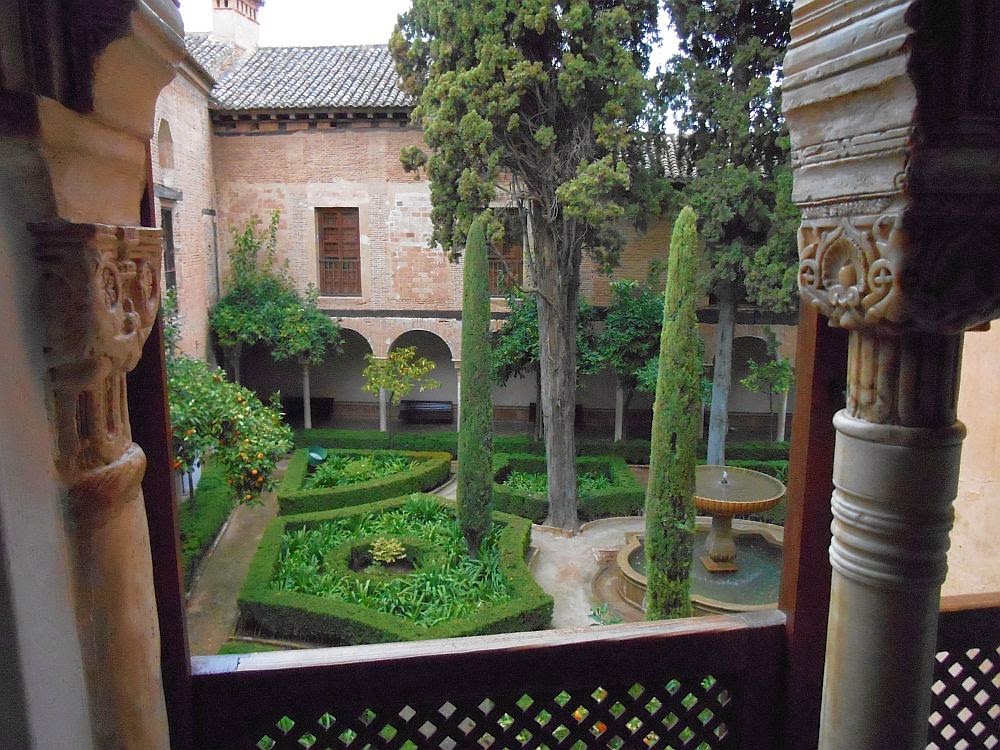 one of the many beautiful gardens. 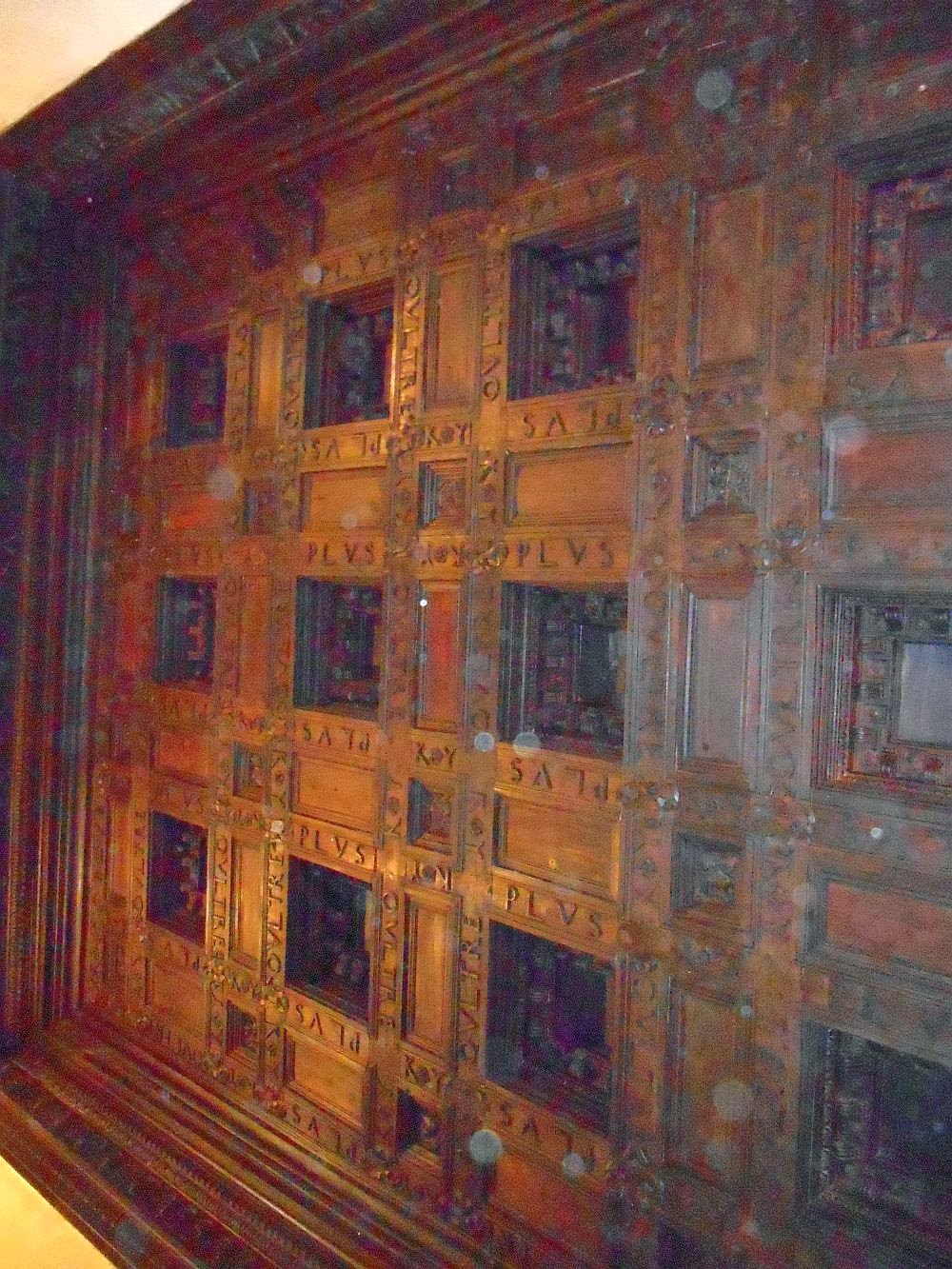 There are examples of The Roman language in areas also. 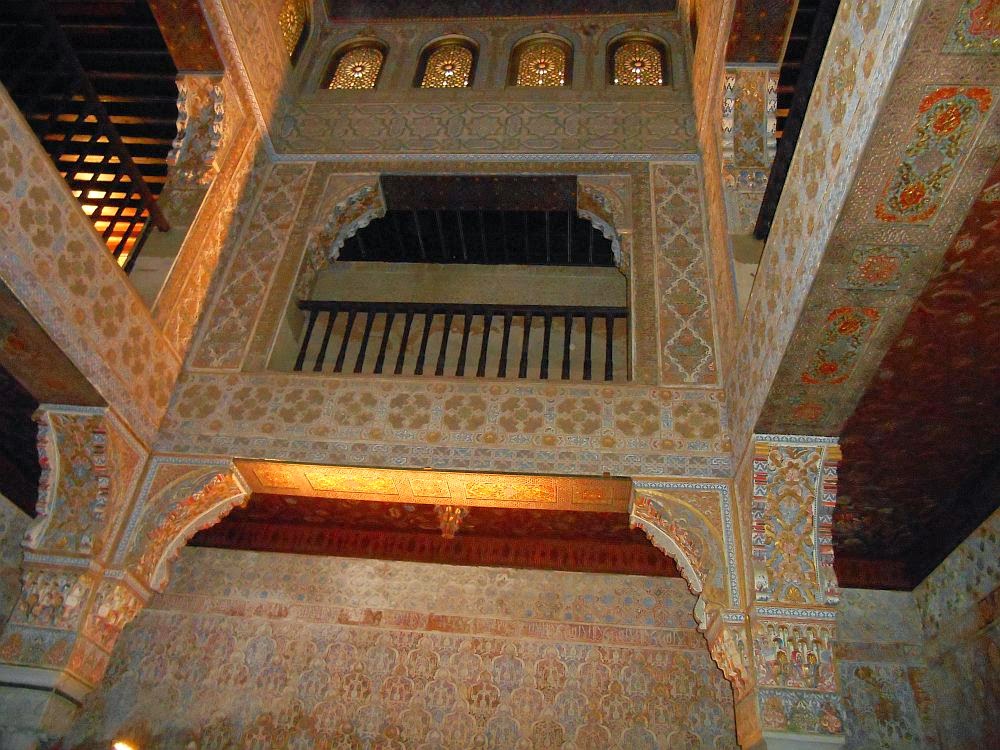 Looking skyward to try to show you more of this incredible structure.

Alhambra means Red Walls or Red Castle, and though some has faded over time, the walls must have looked very red long ago.  There are many areas: The Royal complex, Court of the Myrtles, Hal of Ambassadors, The Court of the Lions, Hall of the Abencerrajes, General Life and many other features.

It's suggested that you allow about 3 hours to tour, however we spent well over that and didn't see much of the outside areas (those we did weren't photographed due to the downpour), The Gardens, or The Palace of Charles V.

Blogging a-z in May, my focus is Spain Click the drop down box to leave your name and url of your blog post, not profile page.
By Sandy at May 17, 2014