The British are Coming!  Does this look Paul Revere?  This statue is King Puck with his crown, but every year in County Kerry a goat is honored.  Don't scratch your head, I shall explain..  An old festival, in fact the oldest in all of Ireland honors a goat.  Once a year a male goat (a puck) is captured and honored for 3 days in town squares.  The goat is well fed, and put high on a scaffolding to survey his territory. 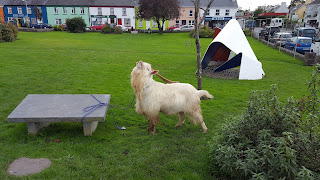 The goat is crowned King by The Queen Puck, who is not another goat, but an honored school girl chosen.  Once she crowns the King, the festivities begin.  There is music, food, and of course drink.  There is dancing.  The local pubs stay open later than normal.  At the end of the 3 days, King Puck is returned to the wilds to resume his normal life. 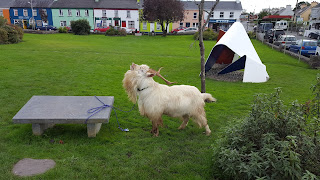 It is not known how long this festival has been in existence or perhaps how it all began, but......it is believed to be a result of The attempt of England's Oliver Cromwell's Raiders to over take Killarney, (Killorglin).  The goats were in the fields as Cromwell's Raiders tried to make they way to town, they spooked the herd of goats.  One said goat made it to town, tired and bedraggled.  Towns people immediately knew something was afoot.  They were able to fortify the town and ward off The English Invaders.  The Paul Revere Goat, certainly something to be celebrated.  The 3 day festival starts every year on August 10th.

*the 2nd and 3rd picture are a small town square where our tour bus stopped briefly.  No scaffolding there, and it wasn't the time of the festival, but apparently some towns/villages honor goats throughout the year.
By Sandy at November 29, 2017