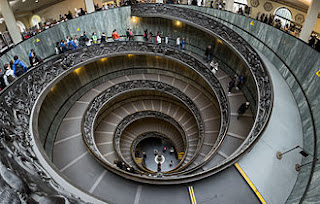 This photo is from Wiki, so you can see what the modern  (built in 1932) Bramante Staircase looks like.  It's a double helix design, modeled after the original built in 1505.  It's purpose is to move traffic in two directions without interruption.

The original was built to accommodate animals and people, and to connect the Belvedere Palace of Pope Innocent VIII to the outside.  Built in a herringbone paving pattern with granite doric columns.

Pope Julius II used it while staying in his carriage, due to the weight of papal vestments.

The staircase is generally not opened to the public, but.......we were given special permission to enter and go to the top.  Just our tour group with a local guide Ziggy. 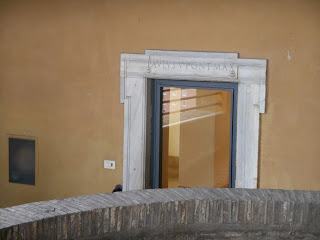 That is the secret special door we entered.  Due to the size of the crowds two guards were there plus our guide to make sure no one but us entered.  And they tried...several tried to get in front of me and were told ...no.  Others experienced the same thing.  Ziggy knew who was in our group and who wasn't and counted them off and the guards backed her up. 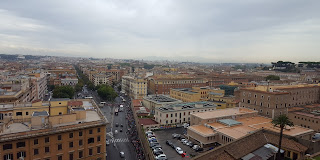 We climbed and continued to snap pictures out the windows 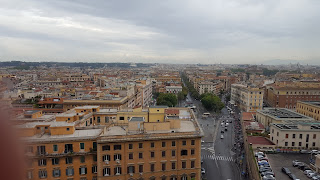 As you can see, the Vatican State spreads out before you.......a good distance. 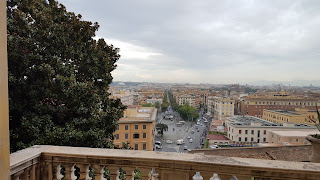 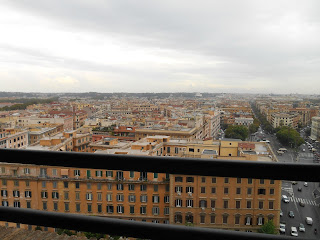 Was dark inside...I tried to get a picture of the floor so you could see the steepness...but, it didn't work out so well, even with the light from the window right there.

We had a break for a lunch (worse meal of the whole trip) in the cafeteria there at Vatican (also very pricey!).  Something to avoid if you go on your own, leave and eat elsewhere. 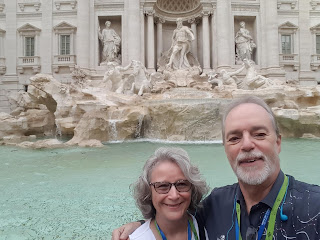 We actually toured the Trevi Fountain that morning prior to the Vatican, but originally it was to be the other way around.  Hubby and I with a pretty decent picture.  If you knew how unusual that was you'd smile. 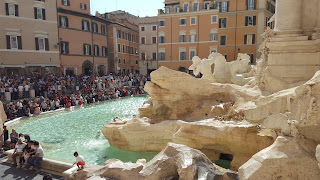 As a point of comparison, this is the fountain the day before when Ern and I walked there on our own from the hotel, prior to meeting up with the tour group.  We missed the fact that we were going as a group, so it was a bit of duplicate activity, but.......as you can see in the afternoons it's very hard to get close due to the crowds.  When we were there in the morning, it happened to be the day they drain the money, so they block it off from people...which they did, right after we got our picture.  Good timing!  The money is collected 3 times a week and all given to charity. 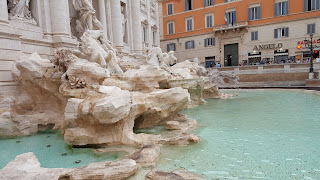 So a few more pictures of different views taken both in the morning without crowds and the previous afternoon with crowds. 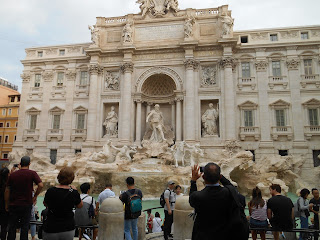 The saying/tradition is you throw a coin in over your shoulder that means you'll return to Rome. 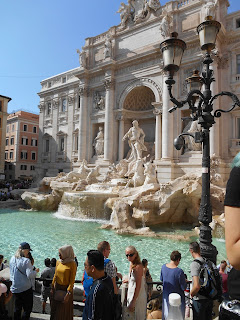 It's quite beautiful there, but I didn't throw any coins in.  Didn't have any and don't know if hubby did, must remember to ask him.  Sorta doubt it.