There is much to see and do while exploring and learning at Antietam National Park in Maryland. You can tour by car, by walking, on your own or in groups. $4.00 per person, $6.00 per family, $20.00 annual pass is a small fee to pay for those that gave so much. Can you see and learn it all in day, NO! Is it worth going multiple times? YES!

The actual address of the park is Sharpesburg, MD; just 10 miles from Hagerstown and 70 miles from Washington D.C. Think how nervous we would be today if a battle took place just 70 miles from our Nations Capital. 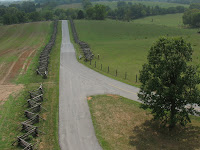 This is farm country, rolling hills green fertile farm land.  This picture gives you a feel for what it must have been like to have a battle going on in your back yard, in your cornfield.  And the importance of the lay of the land, maintaining control over the high ground.  Hold the high ground at all costs. 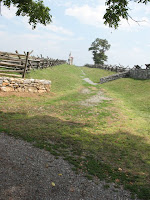 These are trenches.  Picture yourself over the wall on the right picking off men easily as they attempt to move up the hill through the only available opening.  This path holds no protection from enemy fire or means of escape. 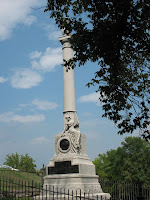 This is one of less than 10 individual memorials in the park.  This memorial is that of President William McKinley.  Not a name you might associate with The Civil War.  He was but 18 years old when war broke out.  He quit his job as postal clerk in Poland, Ohio and enlisted as a Private in Co. E. of the 23rd Ohio Volunteer Infantry.  Before the close of his first year in the military, he was promoted to Commissary Sgt.  It was in this post he made a name for himself that fateful day in Antietam.  His fellow Ohioans had been under fire for quite some time, and he knew his fellow Buckeye's were in need of nourishment.  Against all odds and under fire he proceeded to personally deliver hot food and drink to the men.  His first team of oxen were killed, but he continued on.  His bravery and service to these men didn't go unnoticed.  He was then promoted to 2nd Lt.; and by the close of the war had been promoted to Major.  Thirty years after the bloodiest one day battle in American history, (23,000 soldiers were killed, wounded, and or missing after 12 hours of battle); he became our President.  He served his country as a 14 year member of Congress, twice elected as Governor of the State of Ohio, and twice elected as our President.  He was assassinated in Buffalo, New York by anarchist Leon Czolosz at the Pan-Am Exposition.  This memorial is beautiful.  Look at the details.  I took several closer shots. 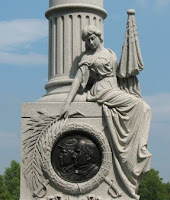 The two faces are of Pvt. and President McKinley.  William McKinley was born Jan. 29, 1848 and died on Sept. 14, 1901.  He was not the only famous Ohioan who served in the 23rd O.V.I, President James A. Garfield did as well.  Sadly, President Garfield was also assassinated in office.  This though is another story; there are many that can be told from a visit to Antietam National Park in Maryland.  I highly recommend this tour for people of all ages.  Children will love to run through the fields, even if they're too young to understand what happened here.  It's beautiful with many opportunities for photo's.  The cannons and the memorials are in abundance.  Some for The Confederacy, some for The Union; some state specific, some for specific companies; and a few for individuals such as President William McKinley.