In my first post about Hilton Head Island, the overview, I talked about the shape of the Island being like the shape of the foot. This drawing helps you see that. We stayed about where the A in Atlantic is, so it was a reasonable 3.5 ish miles for me to ride my bike to The Stoney-Baynard Ruins on the bike path. The dot on the far right indicates where the families were buried; but it's quite a bit further and along the highway so I did not travel there on bike. 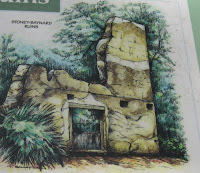 A drawing of the ruins, explaining how the building was made with a method called Tabby. Tabby is made of sea shells that are washed, mixed with sand and fired to form lime. The walls were quite thick, which would have kept the plantation house cool. This is located on the south end of the island in what is now Sea Pines Plantation. The pathway is very much forested, and much of the ruins are hard to see until you're right on top of it. I was alone in the dark woods except for the sounds of birds chirping. A rather strong feeling of excitment and sadness came over me. Excitment because I was standing where history took place. I was standing where a lush plantation once grew, where sadly slaves worked, where Union and Confederate soliders had trod. It was a very moving experience for me.

This is what is left of many lives. This chimney, and foundation of what was probably the cellar. 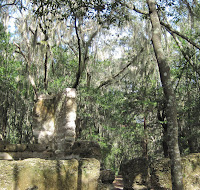 You can walk around the ruins, and imagine what had been a grand house. Historians feel this is only the main portion of the main house.

This is a drawing of what they, the experts believe the house looked like with it's grand steps, cool walk way and entrance to the cellar where the slaves would have stored much of the fruits of their labors, 360 porches where the wealthy plantation owners could view their holdings. Indeed this was a grand house.

This drawing depicts what was believed to be slave quarters. Notice the 2 doors and 2 chimneys. This small dwelling would have housed 2 families. Two families living in damp, dark over crowded quarters. 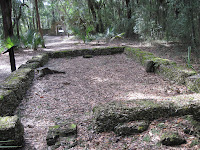 Standing at the end of what had been the above slave quarters and looking towards the ruins of man house, you can see how close the buildings are. It is believed this building would have housed the house slaves. The tree stump on the left and what is left of a support log on the right in the center of the ruin was the half way wall, dividing this small building. This small structure measures only 336 square feet. Records indicate 129 slaves were on the plantation in 1850, and probably 20 of those were domestic or house slaves. 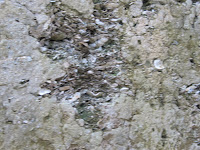 This close up of the ruin allows you to see the shells used in the tabby process.
This is must see when you visit Hilton Head. It gives meaning to those that lived and worked the land before us; those people who weren't here for the beach or golf vacation.