Get Your Kicks on Route 66, Missouri 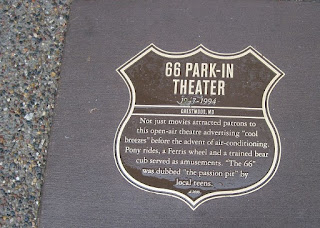 While I don't make a habit of looking down when I walk...look what you can see if you actually look around when walking.  It was raining the day we spent time walking the historic area of Maplewood Missouri, so pictures were a quick snap and move on.  I didn't even take time to read the plaques that day.  But, found several that were very interesting.  The signs says 66 Park in Theater (drive in).  Young folks may have to look that up.  lol  This was locaetd at 9438 Watson Road.  It was built in 1947 by Flexer and after one year taken over by Wehrenberg who operated it til it's closing. 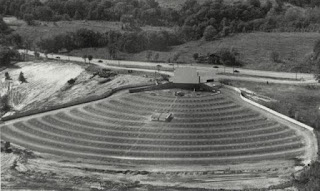 This was located on historic route 66.  I get my kicks on Route 66...something else young folks might need to look up.  We old folk well remember the song and the tv show.  This open air theater advertised "cool breezes" long before air conditioning came about.  There was a playground up front for kids, pony rides, ferris wheels even throughout it's history.    Teens called it the passion pit.  It held 800 cars and had 4 concession stands.  The picture was taken by Chuck1231 and uploaded to Cinema Treasurers(along with 2,551 others). 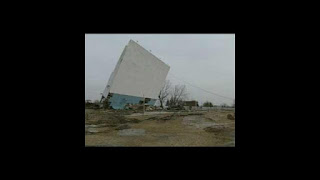 Drive In's popularity lessened with more available on tv, with folks going to the movies and having air conditioning.  66 Park in Theater closed after the 1993 season, and was demolished March 19th, 1994.  Though I also found information that said it was razed in 1996.  It made room for a grocery store, National and after that a Schnucks.  Now there's a shopping center there and all that remains is memories of historic route 66, drive in movies are a thing of the past.

Pop in Often, remember Menu Mondays for dining tips, Traveling Tips on Thursday, and any day for vacation destinations.
(10)
By Sandy at May 04, 2013