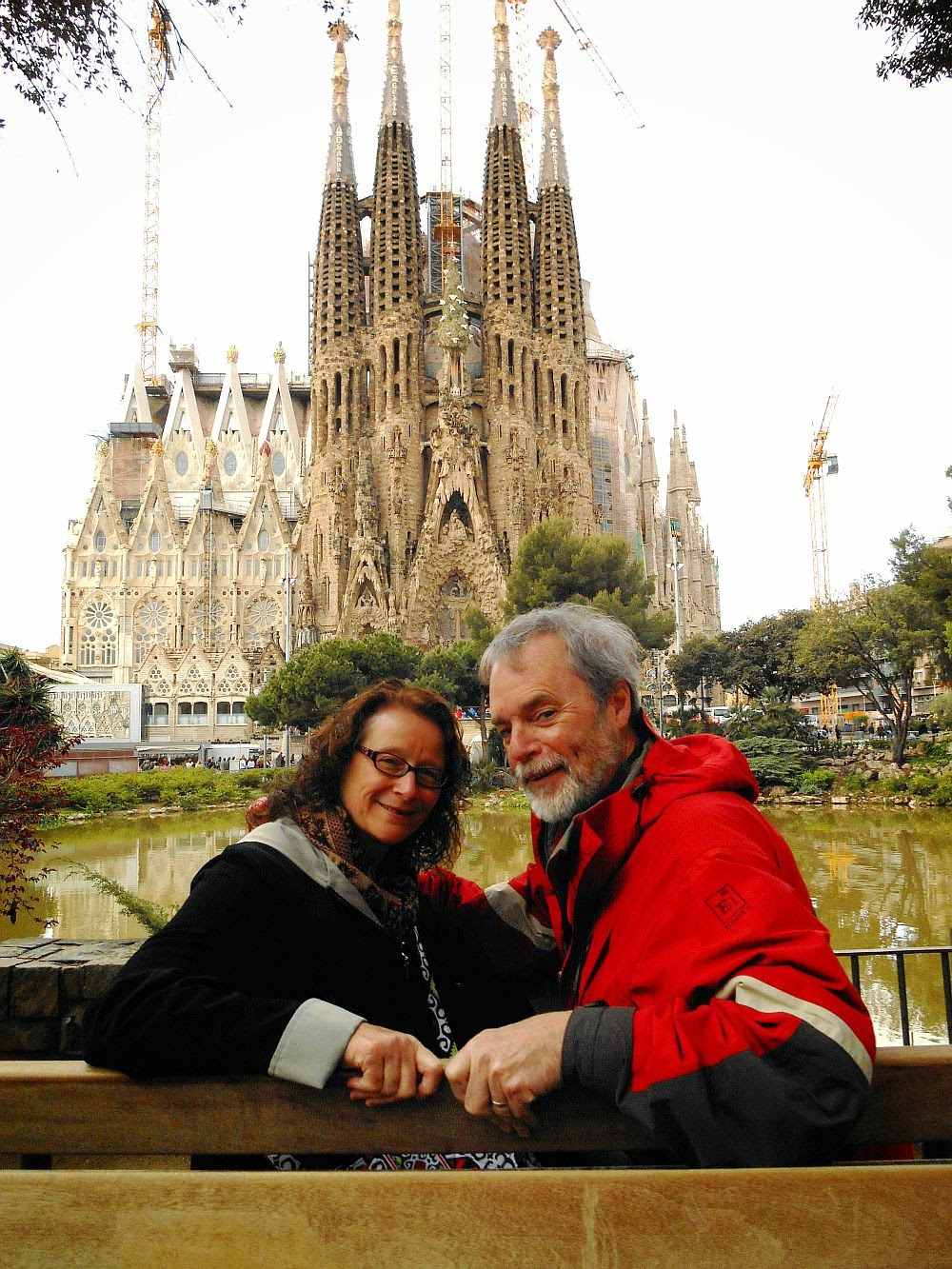 Hubby and I in Barcelona, Spain sitting in the park in front of the famous Basilicia De La Sagrada Familia.  La Sagrada Familia translates into "The Holy Family".  The gorgeous church/cathedral was consecrated on November 7th, 2010 by Pope Benedict XVI and declared a minor Basilica.

In 1882 this phenomenal project was begun by architect  Francisco de Paula del Villar.  He was replaced just 1 and half years later by Antoni Gaudi'.  Gaudi' worked on, rather dedicated his life from that point forward, until his death in 1926 to his "client, God".  At the time of his death in 1926, when he was hit by a tram, it was only 1/4 completed.

There have been slow and slower periods in it's completion.  Though work has always continued following Gaudi's plans and designs there many obstacles in the way.  The church has been totally funded by donations, which weren't always in abundance. 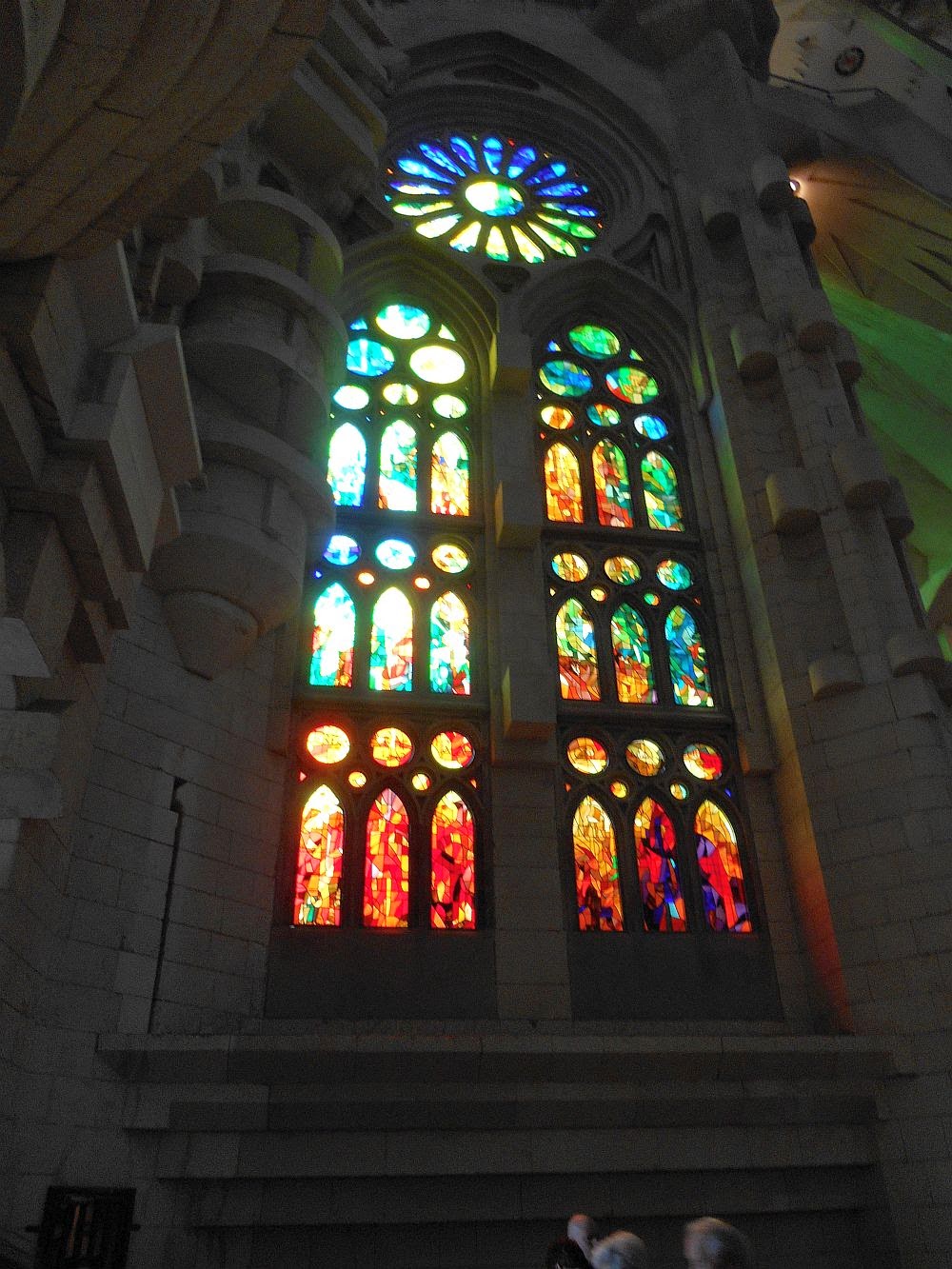 There were very slow periods due to lack of understanding of Gaudi's theroy's.  He believe all art should mimic nature and be without straight lines and right angles.  There was sabotage during The Spanish Civil War, which broke out in 1936.  Revolutionists set fire to the crypt and burned the temporary schools, destroyed the workshops, plans, drawings, and some of the models used to carry on Gaudi's work. 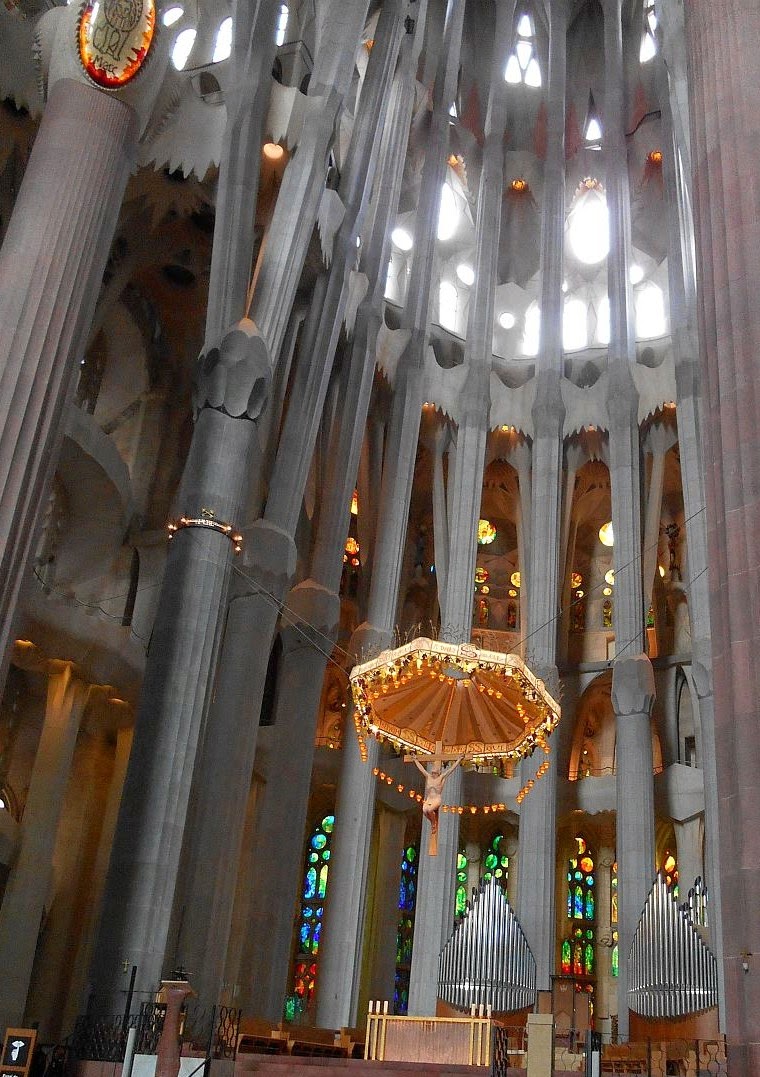 After The Civil War ended in 1939, areas destroyed were restored and work continued.  Click to enlarge and notice the different shapes, sizes, and colors of columns.  They are to resemble trees and a canopy above letting sunlight in. Again, the importance of nature.  The crucifix hangs as if suspended above all, lifting towards heaven. 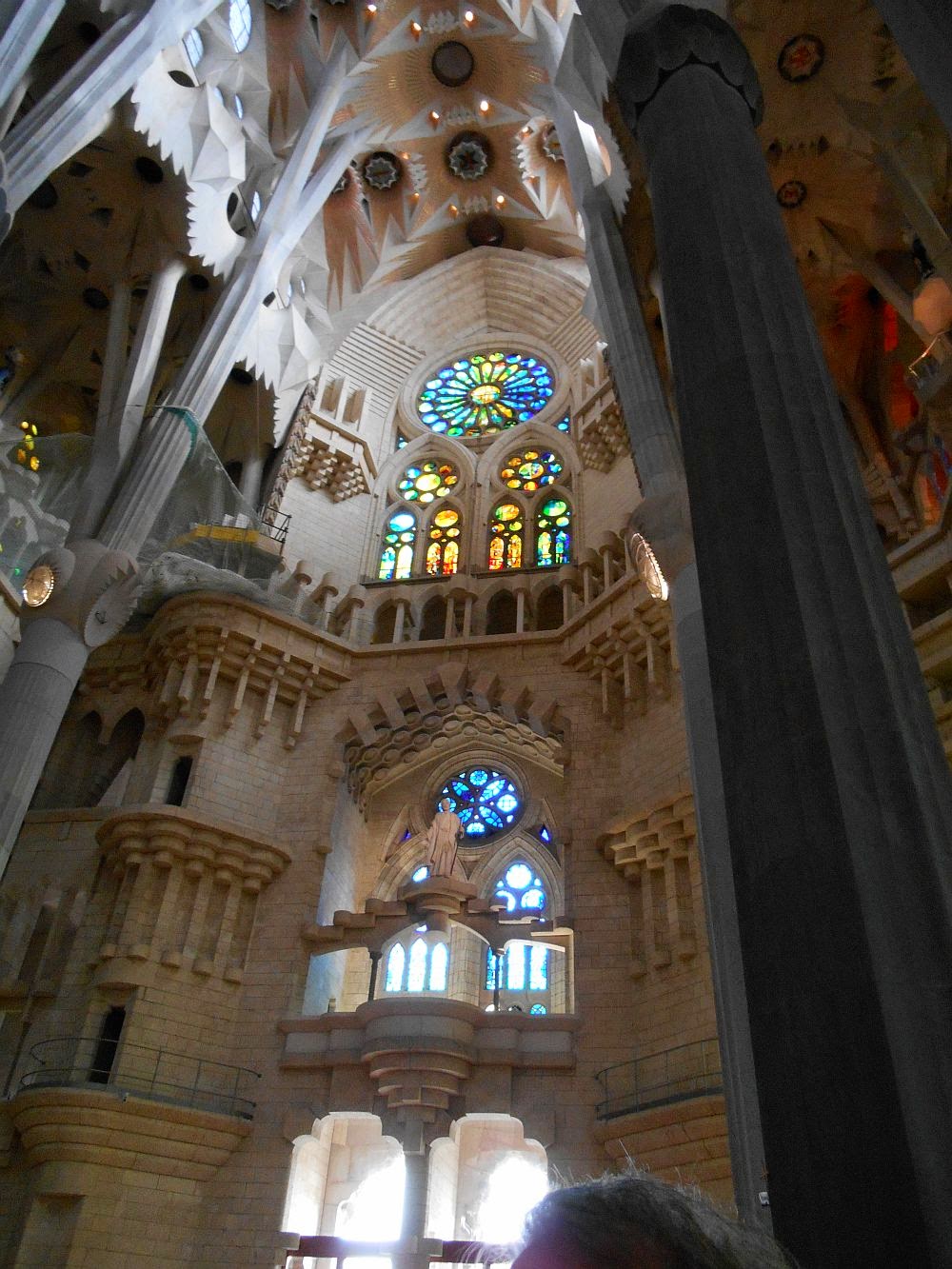 In the years since Gaudi's death there have many architects and sculptors involved with the continuation of the work.  This has caused some speculation and controversy that they maybe following their designs and not Gaudi's.  Experts are divided on that point. 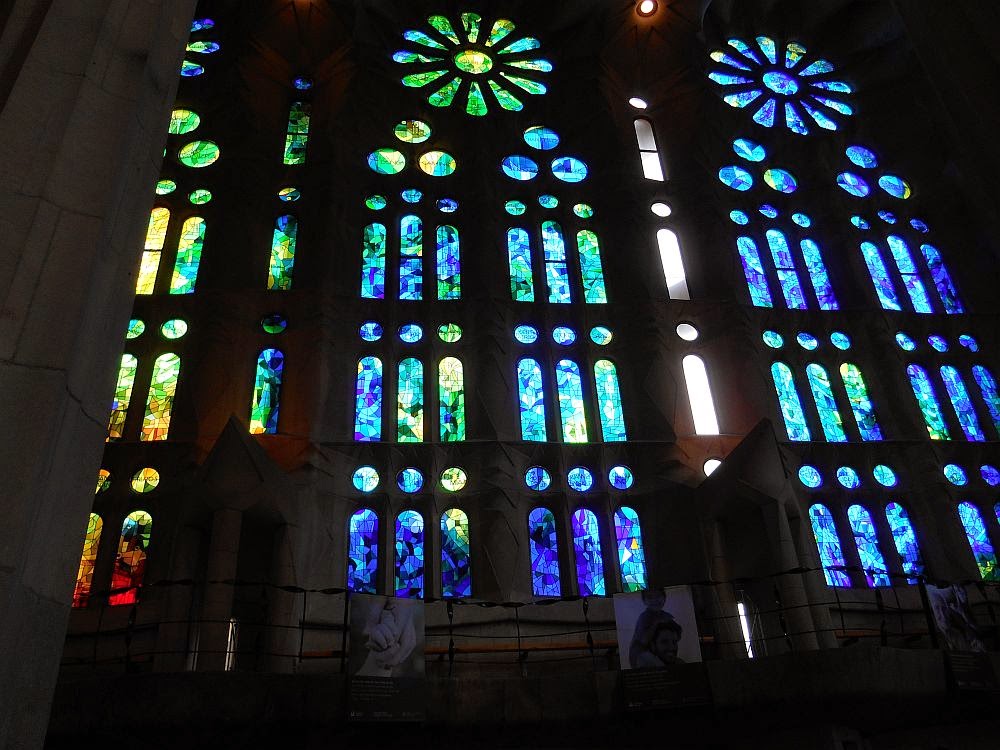 There have been controversy's regarding a proposed high speed rail from Barcelona to France, and or Barcelona to Madrid.  I list both, as I found articles regarding both.  The high speed underground rail could interfere with the stability of the Basilica due to it's proximity stated as one concern. 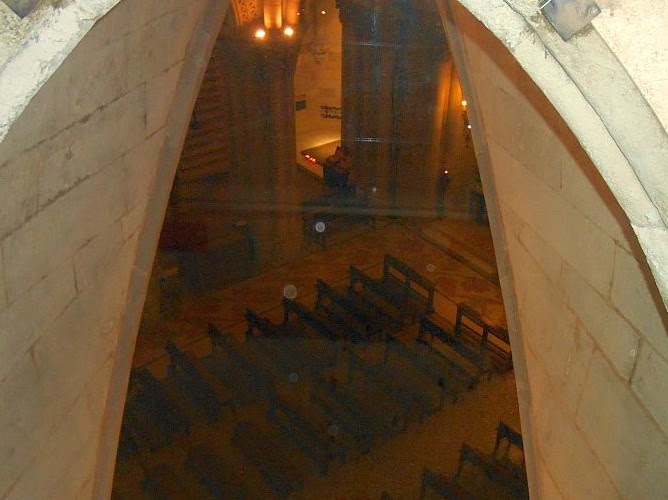 Gaudi' was a very devote man, once going 40 days without food during lent.  He is buried here at The Basilica, where he devoted so much of his life.  Though difficult to see, if you look towards the middle of the picture where the candles are on the floor; that is his grave. 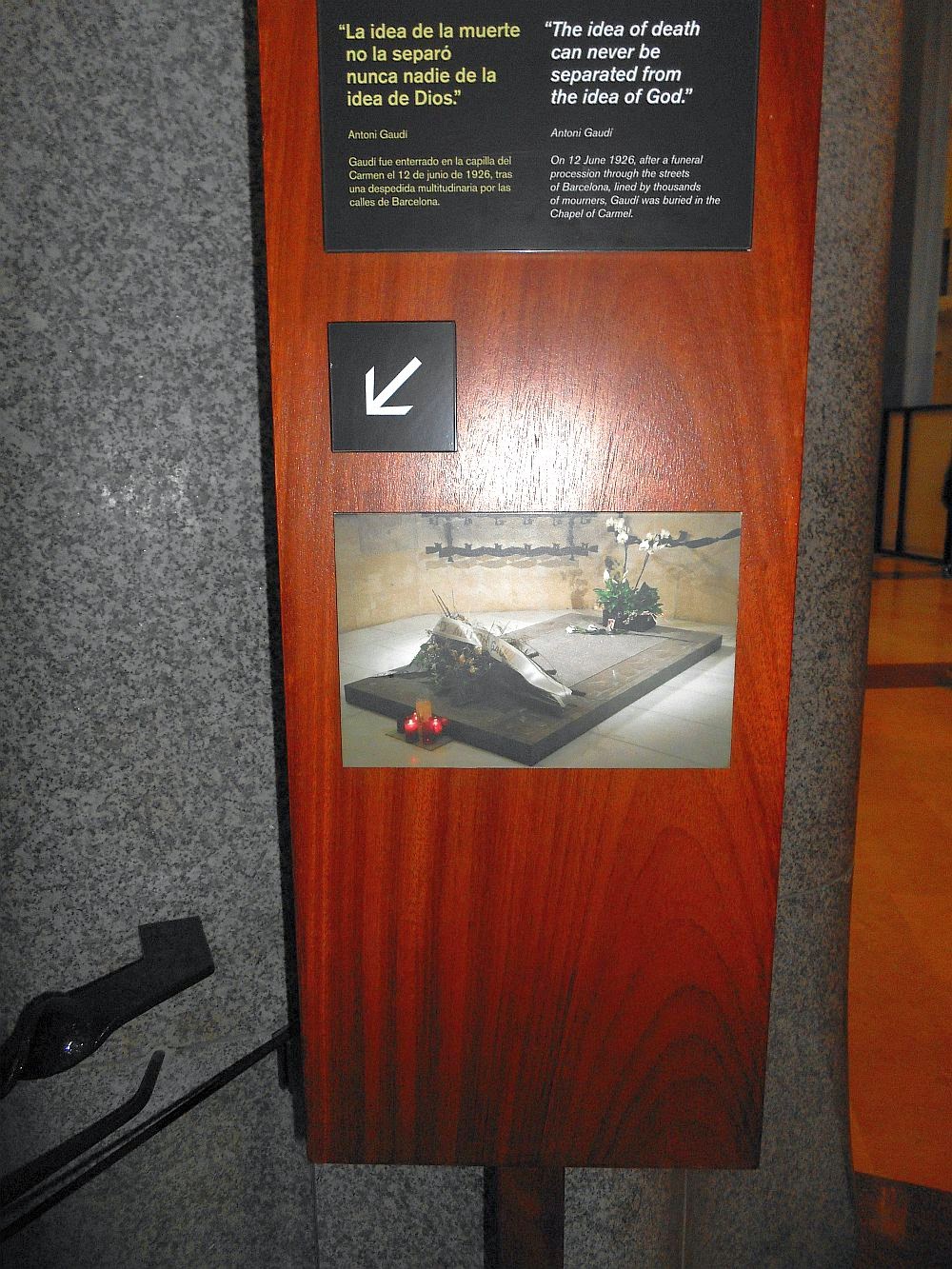 A plaque showing a close up of his final resting place.  He has such a following, there is movement to have him made a Saint. 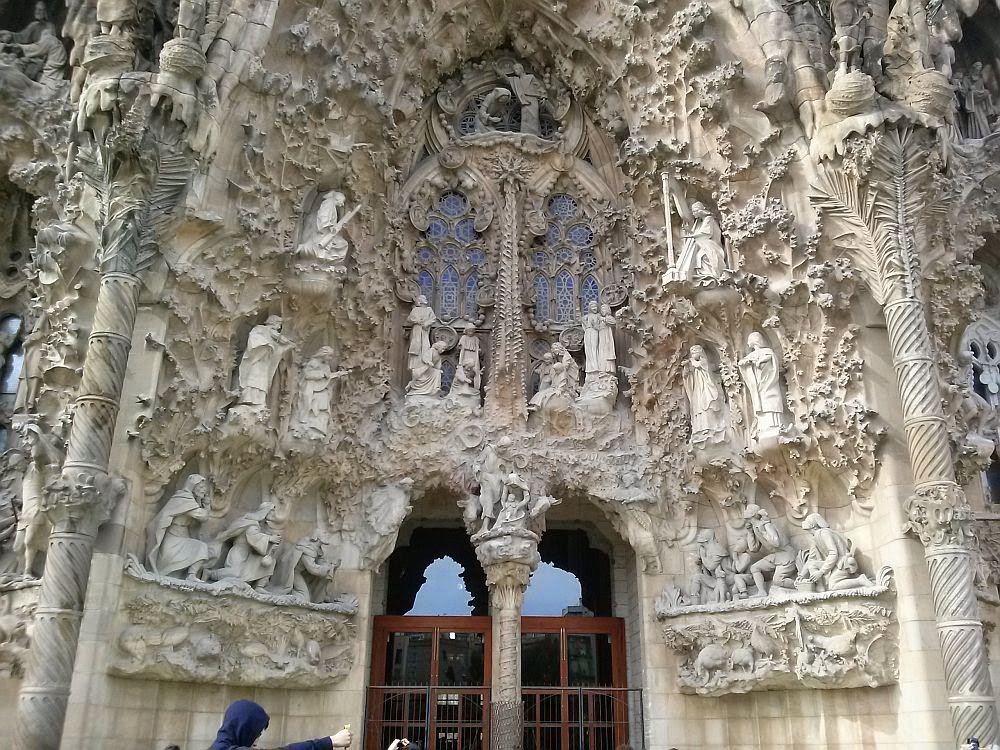 The story of Christ's life is depicted in very detail sculptures around the outside of facility.  Front and center is The Nativity, the story of his birth.  Gaudi' was so passionate about his work, it is said he once had a donkey hoisted on a crane up beside the area being worked on, so the sculpture could truly be accurate.  Another story indicates he visited the hospital and watched deaths, not to be morbid; but to capture when the soul left this earth and met The Holy Family.  He used passions such as these to create.  This is one of the examples why some feel his work cannot truly be carried forward; others are interpreting his passion.   This lush Nativity Facade 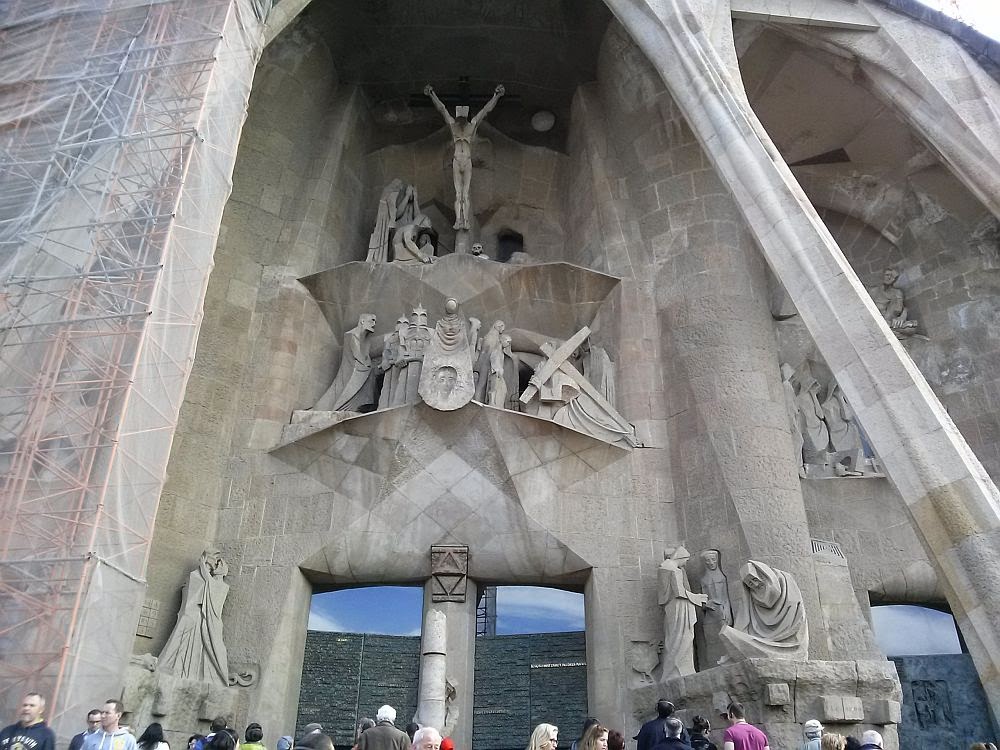 is in stark contrast to newest, very modern, Star Wars/comic and grim Passion Facade.  This cause perhaps the biggest controversy of all.  Thinking of pictures, sculptures you've seen throughout your life of Jesus on the Cross, has he not always been covered?  And yet, The Bible tells us he was stripped of his garments.  Some felt this vulgar and disrespectful.  If you scroll back to The Crucifix inside the Basilica, you'll note while Jesus is in-fact uncovered, Gaudi' had his knee's bent.  It's believed that was his way to show his respect.  This Passion Facade was completed by Josep Maria Subiraehs.

I've read "Art" at it's core should cause people to talk.  With that in mind, perhaps the controversy isn't a negative component.

"A church is the only thing worthy of representing the feelings of a people, for religion is the highest thing in people", Antoni Gaudi'

The grounds are open without charge, while entrance tickets are needed.  Many people pass by the opportunity due to the lines, and or the cost.  I encourage you to take the time, spend the money and do tour both the grounds and the inside.  We went yet a step further and had a private guide, Patrick Ducher; whom I highly recommend.  He got us to the front of the lines, knew how to get in and out of the traffic of people.  His driver dropped us in front and collected us when Patrick called to say we were departing.  Driving there, or trying to park truly isn't possible.  Don't short change yourself.  It is breathtaking, both spiritually  and architecturally. (I've linked to awesome reviews of this tour service, and the webpage).

Tickets were 12.50 Euro's a piece when we were there.  Around $18.00 US and worth every penny!  2 Million people visit annually, these funds along with donations keep this marvelous project going.  Currently, the projected completion date is 2026.

Blogging a-z in May, my focus is Spain Click the drop down box to leave your name and url of your blog post, not profile page.
By Sandy at May 29, 2014