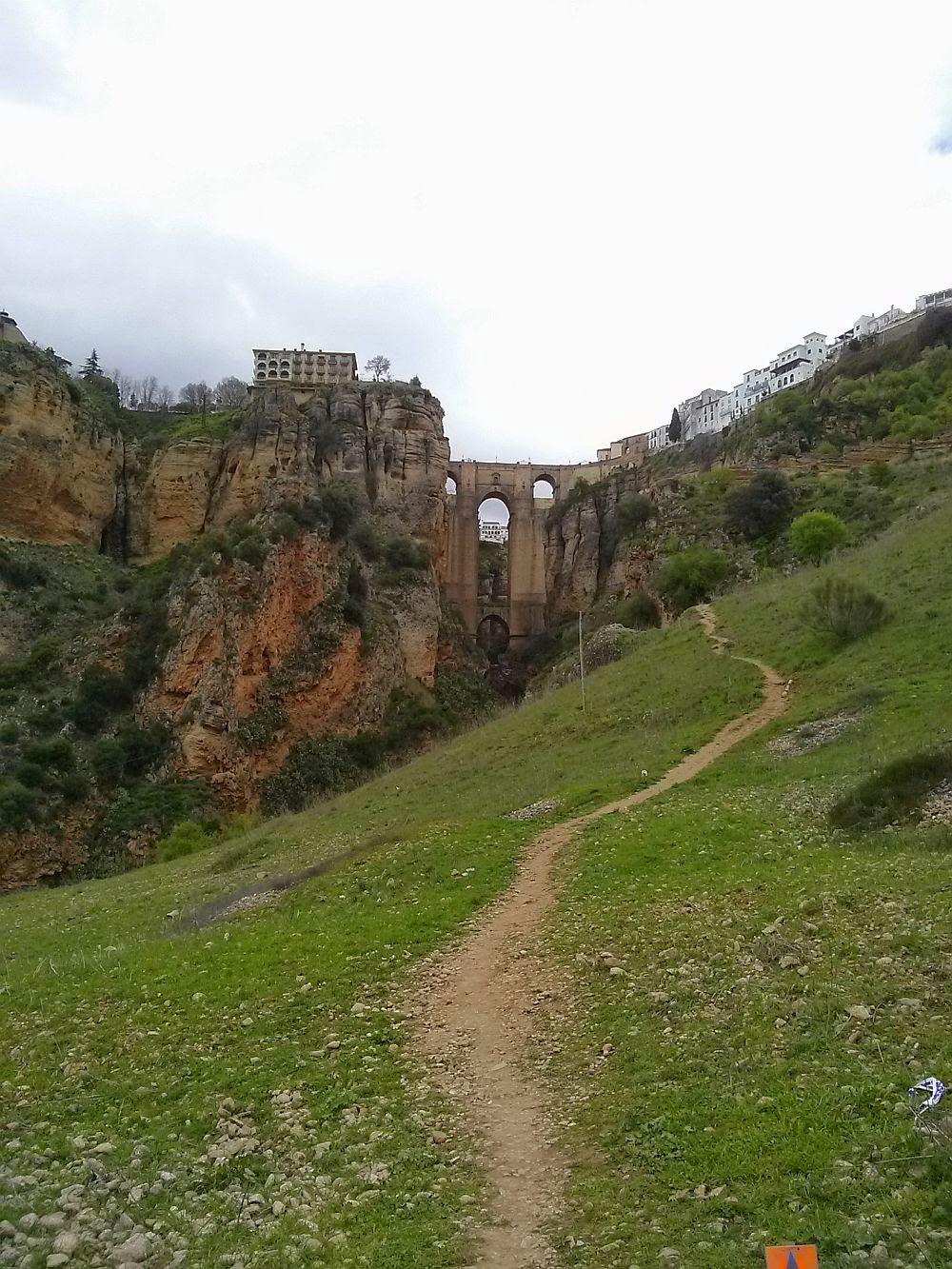 Ronda Spain is beautiful, quaint, and quite interesting.  There are remains of prehistoric settlements dating back to the nelolithic age.  You can see how steep this area is.  We're down in the river valley, looking up at the bridges and the town. 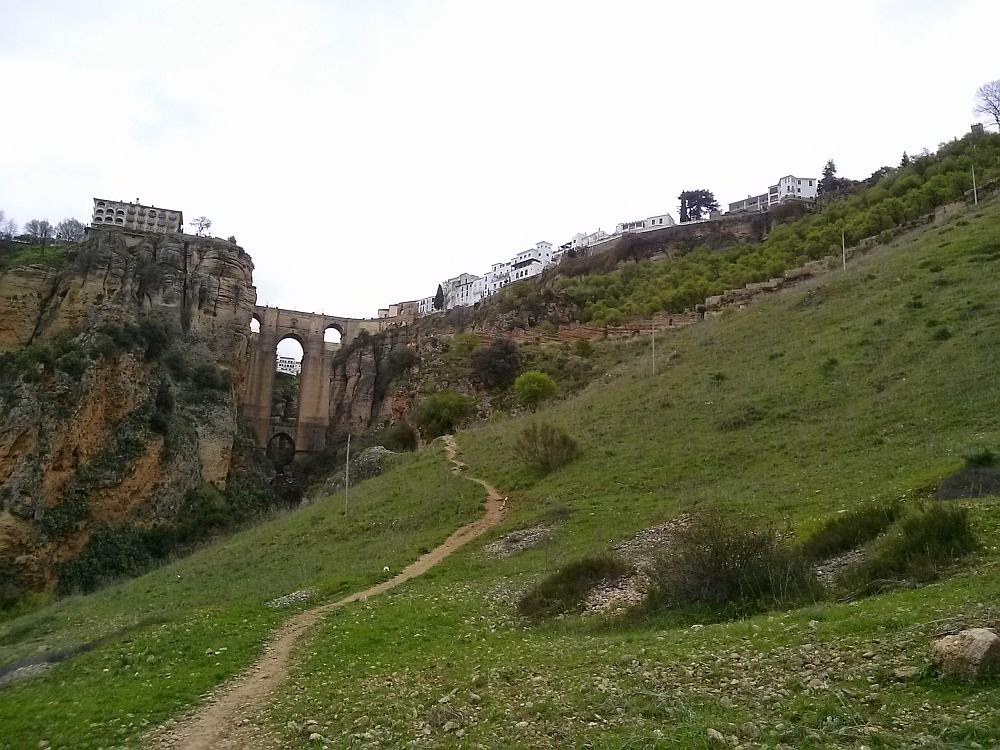 The Celts called it Arunda ack in the 6th century BC.  Later The Phoenicians established near by and called it Ronda la Vieja, Arunda or Old Ronda.  Current Ronda has Roman origins, as it was a fortified post during 2nd Punic War, and by the time of Julius Caesar was named Ronda. 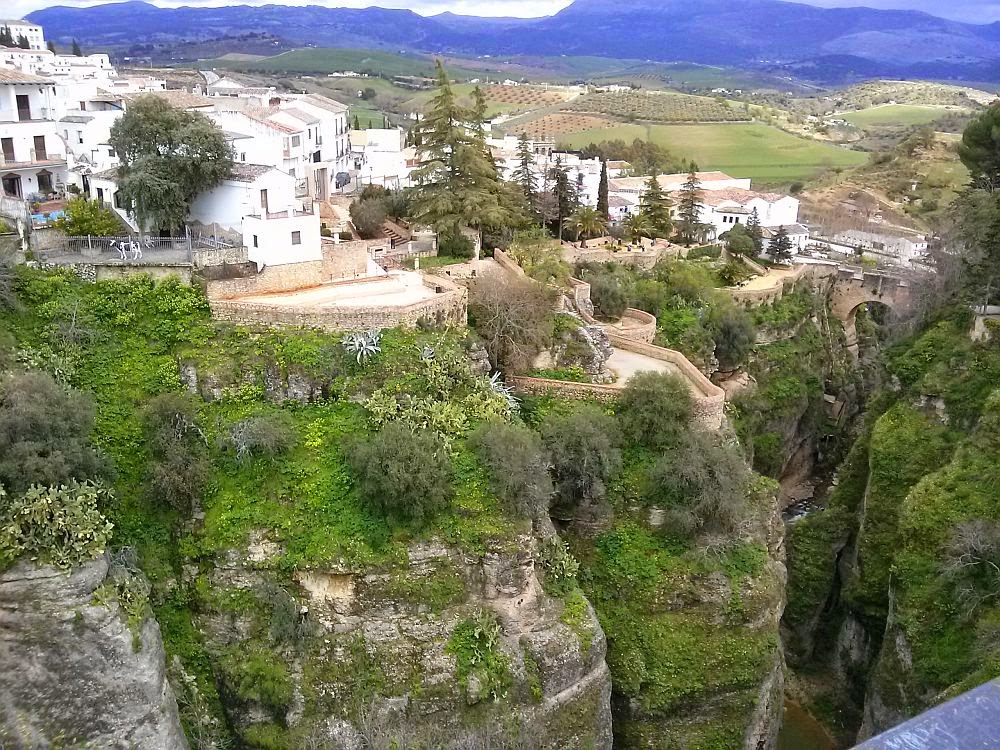 Notice the wall completely around the village.  They had to keep people from falling.  The arch you see in the first two pictures with the bridge is located to the right in this picture.  Click if you need to enlarge it to see the details, and the depth of this gorge. 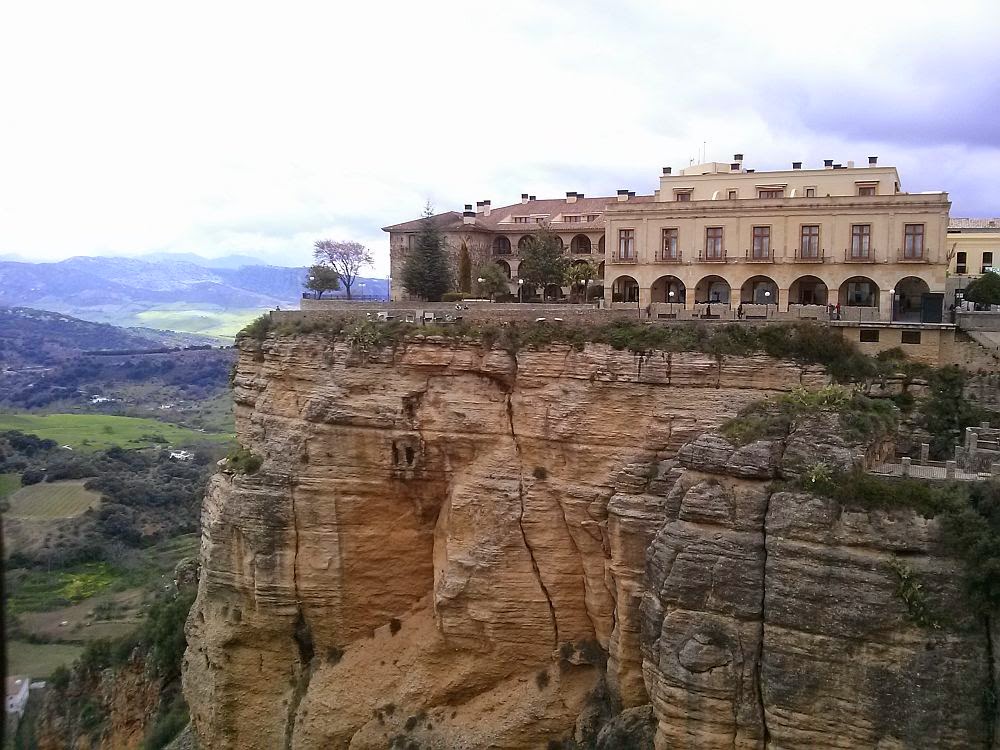 Another view showing you how mountainous and picturesque the area is.  The large building is a hotel.  The village/town of Ronda was also called Hisn Ar-Rundah (Castle of Rundah) when it was Arab controlled.  At one time it was the Capital of a small Kingdom ruled by a Berber.  Islamic domination in the are ended in 1485 through out Spain.  After the conquests Jews and Muslims were forced to leave or to convert to Christianity.  Many converted publically, but continued to practice their religion in secret.   Many were persecuted and fled to the mountains here in Ronda.  Muslims who converted were forced to wear a blue star on their head dressings so they could be identified. 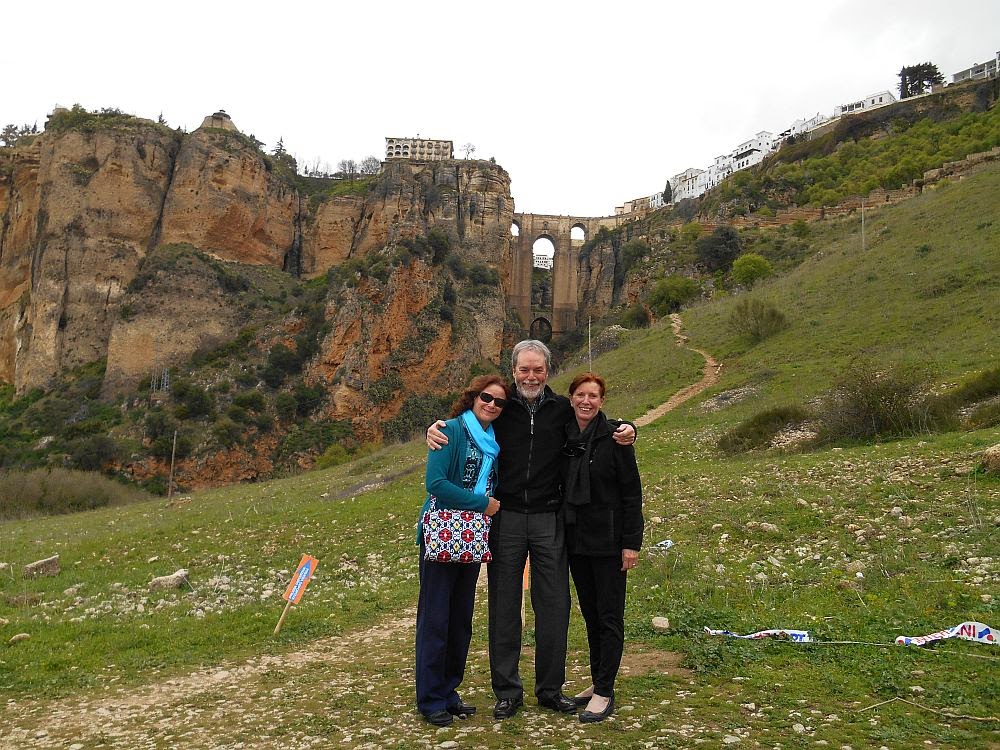 Again the view looking up, myself, hubby, and Dear Friend Jane. 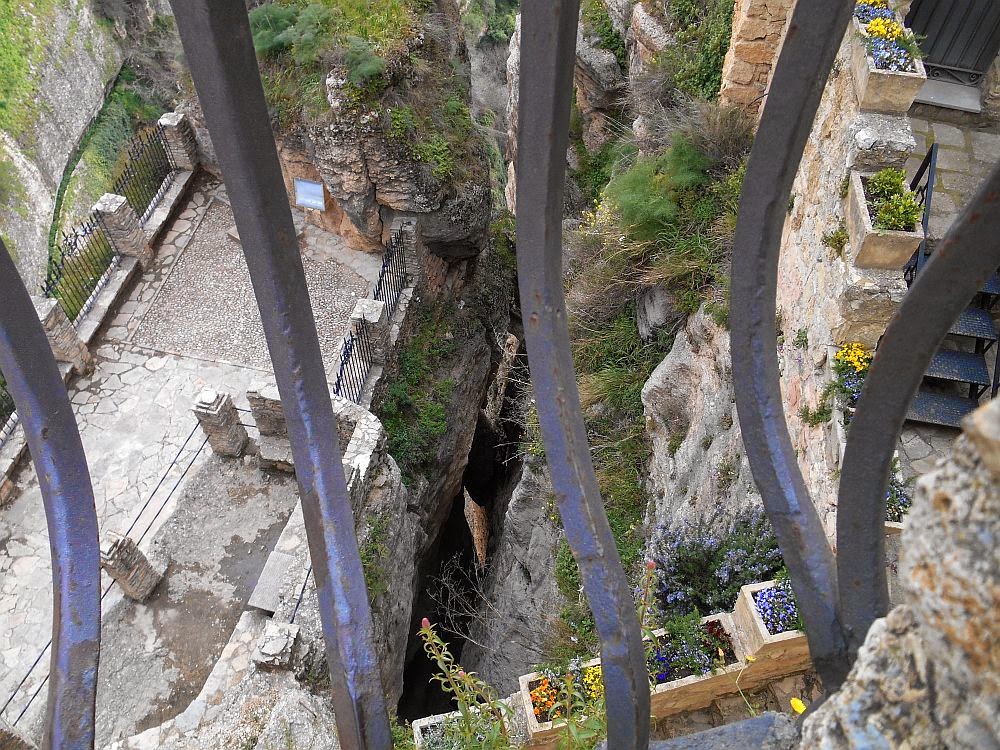 In 1566 Philip, II decreed that the use of Arabic language was illegal, be it written or spoken.  Doors were to be open on Fridays so Friday Muslims Prayers couldn't take place.  There was an uprising and the Christians were overtaken.  Philip II declared those in Ronda should be killed and those who weren't were sold as slaves.  In the 9th century there was The Napoleonic Invasion and later The Peninsula Wars.  Given the land scape it's easy to see how it became an area for guerrilla warriors and bandits. 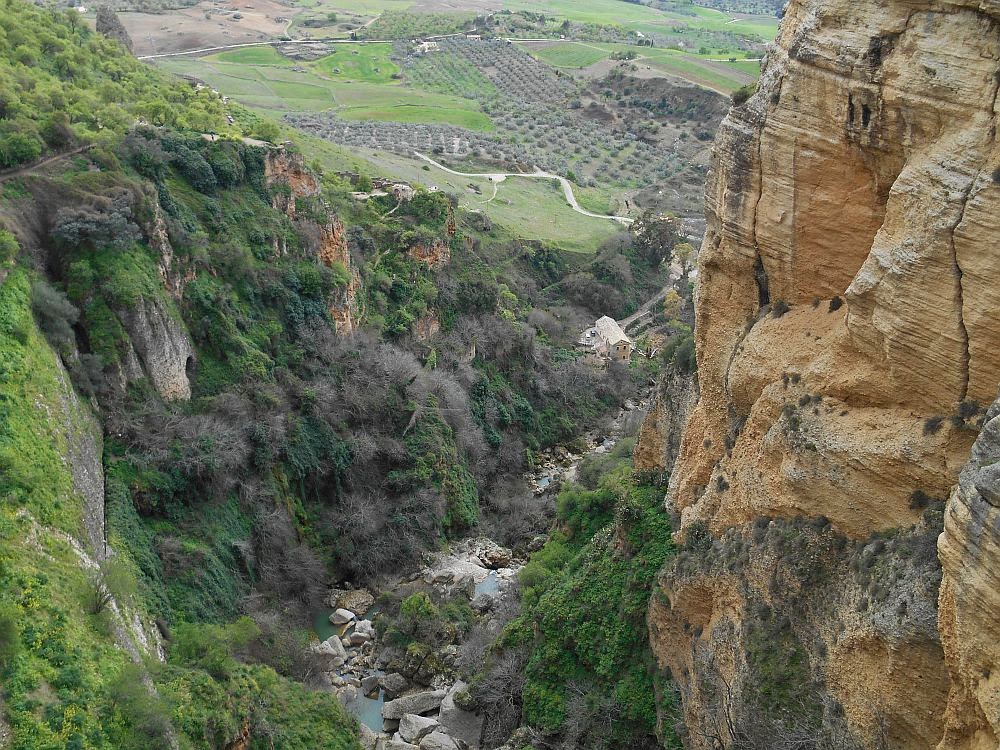 Hemingway and Orson Wells wrote about this period in Ronda's history.  Hemingway's "For Whom The Bell Tolls" depicted people being thrown off the cliff, which is believed to have been from Ronda's history.  The area was famous for it's bull fighting, and still has the oldest bull fighting ring in Spain.  Though it's a museum and not a ring any longer.

We walked the main street which is quite quaint with little shops and cafe's and enjoyed a glass of Spanish Wine catching our breath, as we waited for our tour guide to pick us up.

Do put Ronda on your list of places to visit.  We stopped here briefly on our return from a day visit to Seville.  I

Blogging a-z in May, my focus is Spain Click the drop down box to leave your name and url of your blog post, not profile page.
By Sandy at May 27, 2014