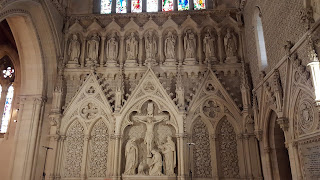 Inside a beautiful old Gothic Style Church, St. Colman's in The Port of Cobh. (Kinsale)  It's also known as Cobh Cathedral.  Construction of the church took 47 years.  I've found conflicting information about when it began, 1867 or 1879; however...I've found the 1867 date to be more universally used.  It's truly breathtaking with such detail in the carvings, and the colors in the stain glass windows. 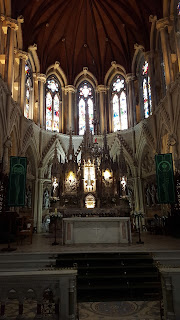 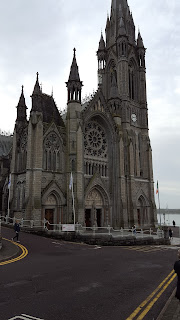 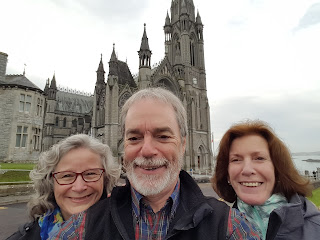 Our selfie with the Church and the sea behind us.  Myself, my husband, and our very good friend, Jane.  The church sits on a very busy corner and narrow road leading up a very steep hill.  Beside the road is a dramatic drop off to the sea. 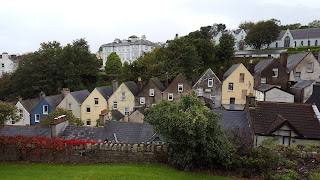 Across the street from the Church you see this dramatic site of little houses.  These houses are all built into a very step hill that falls away to the sea.  This site is quite unique for several reason.  It's steepness, the fact that the houses are all attached; and from what we were told...they hold each other up due to the construction of the chimney.  They're small, quite old, and very narrow.  The upper window also plays an importance structurally.

This photo is not one of mine, but one I found on the net, taken by Bjorn Christian Tiorrissen in 2012.  The site says the photo can be used, but to please give credit.  This professional obviously was able to capture the dramatic site far better than we could with our cell phones. 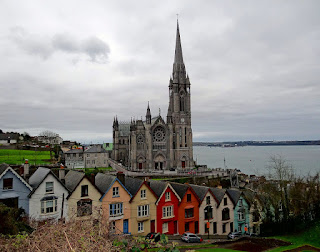 My picture shoes the back of the houses from the walkway across the street from St. Colman's.  This photo shows the front of the wee little houses with the church behind.  We didn't manage to get to the spot where this might have been taken.  But, isn't it gorgeous!
By Sandy at October 31, 2017