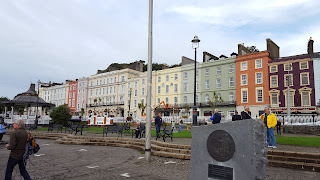 The Port of Cobh (pronounced Cove) was an added excursion we took one morning when about half those in our tour group had a relaxed start to their day at the hotel.  This town is famous for it's the port That both The Titanic and The Lusitania departed from.  It's a quint very picturesque village. This is right on the water front, a pretty park across from hotels and restaurants.  There's a gazebo that is used for outdoor events in the summer months.  It was a bit over cast the day we were there in September.  This park is right next to the ticket office and the port departure area for many ships departing with deportees, and immigrants, as well as The Titanic . 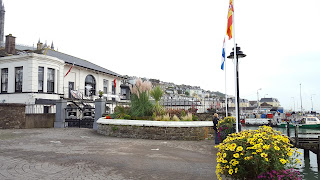 This white building is the ticket office where one purchased their tickets for departure. 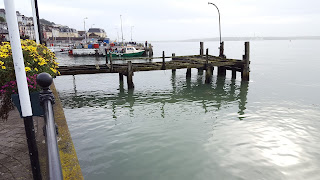 This is what is left of dock that The Titanic departed from.  When the horribly sad news came of the sinking and loss of life, the gate to the dock was locked; NEVER to used again.  The Titanic records aren't clear as to the number on board who died, but the number is believed to be between 1490-1635.  Apparently there was mass confusion.  The ship had been given 6 warnings of ice bergs, but they were unable to see to avoid the trouble.  There weren't enough life boats for the number of passengers, and too many life boats left with too few passengers.  Records show the first life boat to leave held less than half the number it was meant to carry.  Sadly, that was repeated.  The ship was only 5 days into it's voyage when it was hit by the iceberg on April 14-15th, 1912.  Once hit, it only took 2 hours and 40 minutes to sink. 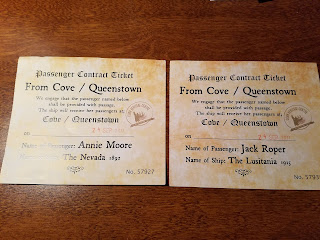 A wonderful museum with information about the many ships that left this harbor loaded with immigrants.  Some by choice, others forced to flee Ireland.  As you purchased your ticket, you're given a ticket with the name of a real passenger and the ship they sailed on.  As you tour, you're to determine if your person lived, as so many didn't.  And, where they went; as well as something about their lives. 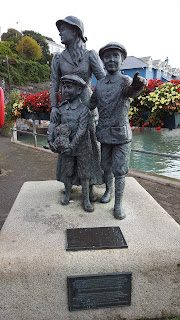 I was Annie Moore who sailed from the port on The Nevada in 1892.  She is depicted here with her two younger brothers.  She was the first person to be processed at Ellis Island.  Annie was born here in Cork on May 24th, 1874 and died in New York on Dec 6th 1924.  She is buried in Calvary Cemetery.  She died of heart failure after a very hard life of poverty.  For many years there was a mistake with her name  and it was thought a woman who lived in Texas was her; her story was more successful.  The real Annie had 11 children and never led a life of ease.  When she departed Cobh, she was one of 148 passengers.  She and her brothers were in steerage.  The trip must have been very hard.  Some records indicate she 15, while others say 17 at the time. 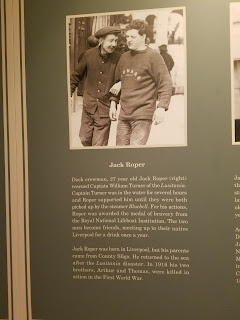 Hubby's ticket indicated he was Jack Roper who left Port on The Lusitania in 1915.  Jack was born April 7th, 1888 in Liverpool and died May 14th, 1952 in Liverpool at the age of 64.  He was one of the few survivors.  When the ship went down, he managed to save several passengers, most notably The Captain.  The met up once a year for a drink in Liverpool thereafter.  The Lusitania and so many of it's passengers perished on May 7th, 1915.  He was a very interesting person, left school at the of 13 to hit the high seas, as a cook.  After The Lusitania he spent some time on land before returning to the sea as a cook.  Interesting, for this voyage on The Lusitania he is listed not as a cook, but as an able bodied seaman.  Researches seem to feel that is indeed accurate, else he would not have been on deck and and able to save people.  No one seems to know why he wasn't a cook on this voyage.

There is a fair amount of speculation and research that indicates The Lusitania may have been sabotaged by Winston Churchill telling The Germans of it's departure and location.  The feeling is, by doing so, Americans would be outraged and would thus enter The War.  There's some food for thought.  I'm not sure he was known to be a "nice" man, so who knows.

By learning about the lives of the person on your ticket, you really make the visit to the museum quite personal.

I'm sorry we didn't get to spend more time here in Cobh, there was much to see.  Stop in next time for part II of The Port of Cobh