Day 5, Florence Birthplace of The Renaissance 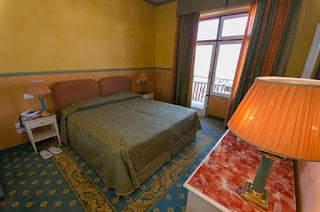 After our wonderful diner at Dianella Vineyard, we boarded the coach and made our way to our next lodging.  Grand Hotel Tamerici E Principe in Montecatini.

Our room didn't look that nice.  We arrived after dark and had a hard time making our way to our room as the halls weren't lite..not sure what that was about.  But, a bad start.  We've opted for twins so they weren't together as in the hotel's picture.
The window initially looked almost boarded up...then hubby realized they were like wooden shutters that needed to be opened and there was actually a little balcony.  Though really no view of anything interesting.  The door leading into the bathroom obstructed part of the end of my bed, so it was rather tight quarters. 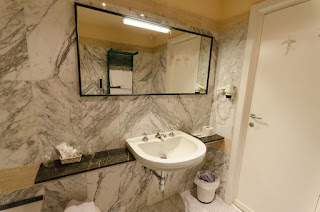 The bathrooms seemed to have been remodeled more recently then the rooms.  Had to use the hotel pictures because we forgot to take any ourselves.  We basically got there, got a shower and went to bed.  Common spaces were pretty attractive, like lobby and pool area; but we didn't use those areas.
**This is one of the rooms that got changed from our original itinerary.  We got the revised edition of it, the day before we left the US.  The hotel we were suppose to be in looked much more modern.  This happens sometimes on tours, and while I think the other hotel looked nicer...you're busy, you're not at the hotel much more than to sleep and shower...so, as long as it's clean and you can sleep...normally that's the important thing.  But, I must say our beds were terrible.  The mattress needed to be replaced LONG ago.  The bed was so soft, there was no edge support and when you rolled over, it felt like you were going to fall out.  I would NOT recommend this hotel. (maybe that's why I never took pictures).

Day 5 indicates we're heading to Florence, the birthplace of The Renaissance.
We did a fair amount of walking, exploring, shopping and had lunch. 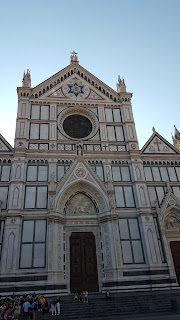 The Cathedral, a UNESCO site is one 7 listed for Tuscany.  Florence is the capital of the region and was the first area to be listed as a UNESCO site of those in Tuscany. 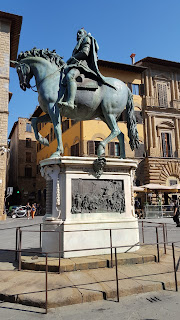 Statues abound.  The center of the historic city is considered to be an open air museum 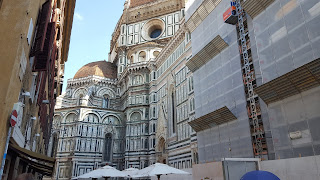 Duomo Cathedral by Brunelleschi is also a UNESCO Heritage Site.  The dome is visible from many areas as you walk about the area. 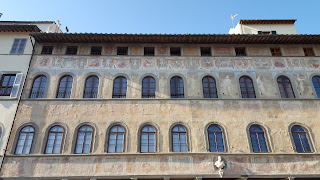 Lots of interesting details in so many of buildings. 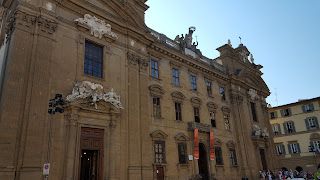 Lines forming to see The David, at the Galleria dell'Accademia which is also listed as a UNESCO site. 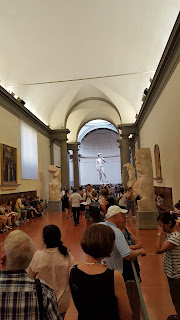 They only allow groups of about 20 to tour the museum, so they broke us in 2 groups with 2 different tour guides. 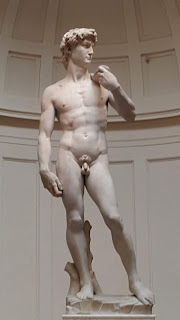 It's hard to believe this is stone 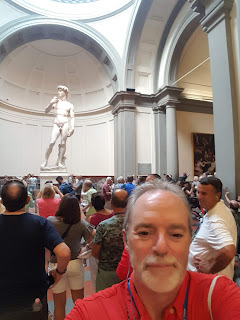 Hubby with some of our tour group behind him. 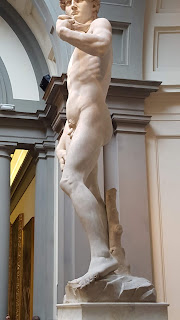 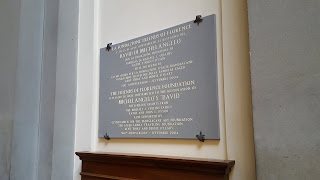 Florence is known for Leather We toured The Peruzzi Leather shop, and this wonderful red purse came home with me.  I really like it, it's not heavy and it's not too big.  I find buying purses difficult.  It's sooooo soft.  Peruzzi Handcrafted leather is gorgeous.  Ernie tried on leather jackets, but just couldn't quite get there.

After touring the center area, and The Peruzzi shop we were met up again with our tour guide before walking to see The David.  I mention this, as there were several places on our tour that a tour coach can not go due to the tightness of the roads, traffic and number of people.  Our lady with the wheel chair needed a cab for this portion of our tour.  I mention that, because if you're scheduled to take a tour of Italy, please call ahead and ask about conditions and how much walking there is.  Had our guide not been a very physically capable gentlemen, it would have been quite a problem.  As mentioned in previous posts, wheelchairs don't do well on cobblestone and the pushing a chair up and down lots of hills for a day of walking is not well suited for many seniors.

After lots of walking we boarded our coach and headed back to the hotel to shower and get ready for dinner.  Dinner in the Tuscan Hills, another one of our optional add extra excursions. We drove into the hills surrounding  Florence  for what was to be a typical Florentine meal complete with Chianti wine, music and fun.

This optional was 65 Euro's each.  Food was plentiful, as was the wine.  The weather was gorgeous and we ate outside and large picnic tables.  There were I think about 4 coaches full all in their own areas.  Music played and some folks danced.  A fun night was had by all.  On the way back to our hotel, the folks on the coach sang a rousing chorus of Sweet Caroline.  As Francis said, wine helps people relax.