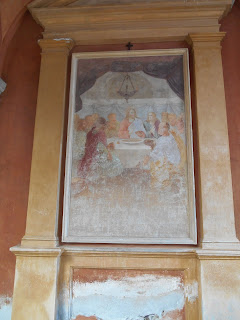 Day 7 Lake Maggiore Continued.  In the previous post you saw pictures of The Church, and The Square.  Though these are quite faded, I thought it still nice that they exist. 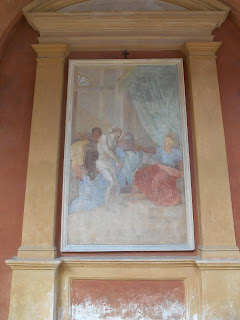 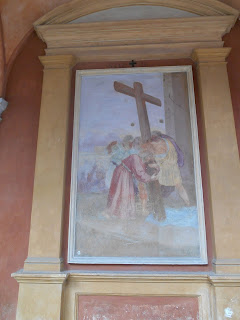 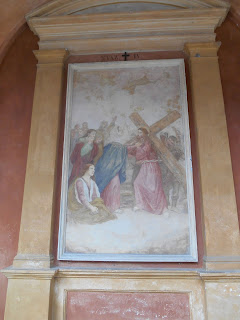 I did photo graph all 13 stations, but will share just a few. 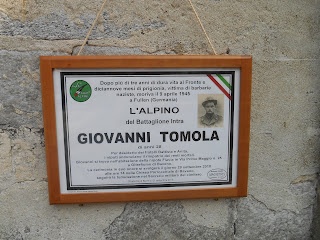 I spotted this in this square and photographed, so I could look it up later.  Giovanni was in an Alpine regiment, and was taken prisoner by The Germans/Nazi's.  He died in a prison camp and 73 years later he was repatriated here in Baveno, the place of his birth.  I believe the sign was to let people know the ceremony would be here the following Sat.  We were there on Sept 23rd, and the ceremony to honor him was the 29th of September.


**While this video is in Italian, you can see how pleased town folks were to honor him and his family.  He was awarded a medal.  It appears the ceremony took place in the little church we visited (please see previous post).

What a nice explore we had!

We met up with the tour group again in the lobby of the hotel at the appointed hour to disperse for dinner.  Menu's had been passed around the coach on our way to Lake Maggiore and folks selected where they wanted to dine (included meal), based on the 3 menu's.

Our group was the largest of 3 groups, but I'm not sure based on the reports from each group about dinner we choose as well as the other 2 groups.  They had some outside tables, but our reservations took us indoors.

To a back room with no windows, and it was quite stuffy.  We did finally get them to turn on the fans.  We were sitting at one really long table which made it difficult to talk well with everyone.  It wasn't a great meal, but wasn't bad either.  We had a really good time with our group.  But the reports from the other 2 groups...sounded like their meals might have been better.  One was there at the hotel and they said they had so many courses they couldn't eat it all (ours wasn't that filling), the other group sat outside on a very pretty patio and said it was such a nice evening and such good food.  Some in our group made their selection of this location because it served rabbit.  We selected it because it had Tiramisu for desert, lol.

Returned to our rooms and sat on our patio's.  Several of us were next door to each other.  Had a night cap while we watch fireworks!  They were fantastic out over the water.  Tomorrow up early, and back on the coach making our way to Venice with a stop in Verona.