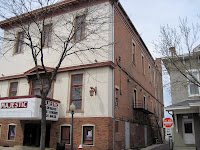 The Majestic Theatre, perhaps it doesn't look impressive to you now in 2010. Consider this-- it's old. Really old, first built in 1809 as The Masonic Lodge. It's been "The Place" to be for many many years. A Grand Dance Hall, a meeting place, a place to hold receptions, a Theatre, a movie theatre, a place to see The Great Vaudeville Acts of a gone by era. The original building measured only 40 x 100, but was added onto many times over the years. Laurel and Hardy, Milton Berle, and Buffalo Bill Cody are among some of those that played here. The building changed hands over the years too. 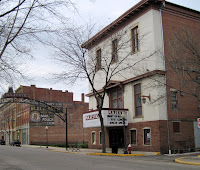 The arch came all the way from Columbus. The Majestic Theatre is the oldest standing theatre in continious operation. It's Fresco ceiling has been refurbished multiple times and is still considered to be quite a showcase of art. Oh the stories it could tell. It could tell of fun first dates, sitting in the balcony holding hands, girls friends going to a matinee together.

There are serious stories it could tell too. It could tell the story of the Movie Reel stopping so the announcement WWII was over could be made, the story of Blacks being discriminated against. You see though they paid the same full price for admission they had to wait for seats to be available in a certain section in the balcony. It could tell the story of blood alley. During the horrific Influenza Epidemic in 1918-19; when more people died of the Flu then from being in The War, Camp Sherman (the World War I Army Base), ran out of space and The Majestic became a morgue. Bodies, were stacked like cord word according to some accounts; and blood ran down the alley from the embalming process. The Alley thus became known as Blood Alley. This is considered one of most haunted places in all of Ohio; and no wonder, given the huge number's of deaths.

Anyone with family in or from Chillicothe has a connection to this Theatre. Mine family was entertained there through multiple generations. Tours are given, the space can be rented for private functions, and it's still active with on going acts. I've not yet been able to tour, but have wanted to many times. It's left it's mark on the history of Chillicothe preserving many artifacts and historical documents in it's various corner stones each time it was refurbished.

Enjoy the history here, take a tour, enjoy the current entertainment, or walk down Blood Alley, if you dare.

Other things to see and do while in Chillicothe:
Indian Mound
Courthouse, and site of the first Capital in the State
Eat at Historic and Haunted Cross Keys Tavern