This log house was first built on land now owned by The Mead Paper Mill. It's been moved twice, dismantled and reconstructed. Touring it gives one a real feel for early life in Chillicothe in 1800-1830's. It's owned and operated by The Ross County Historical Society. 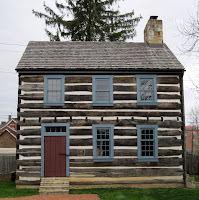 The log house is located at 45 West Fifth Street in Chillicothe, along with Franklin House, McKell Library, and The Museum Area. Hours by appointment from Jan through March, open Tuesday through Sat from 1 pm til 5 pm for a minimal fee from April through December.

This old watering trough is behind the log house. There is much to see here from the early days of Chillicothe. Franklin House focuses on women in history.

This photo was taken years ago of me in front of Thomas Worthington's home, Adena. I'll be posting more about this in detail later, so stay tuned. Thomas Worthington's home is also opened to the public and well worth the time to tour it. He's known as The Father of Ohio Statehood. It's from his home on 2000 acres the seal for The State of Ohio was seen. His home was designed by Benjamin Henry Latrobe, America's first professional architect. You might also know that name as the architect who designed The US Capital for Thomas Jefferson.

Chillicothe is steeped in history, first founded in 1796 by Nathaniel Massie, housing the WWI Army Training Camp, Camp Sherman (named after The Civil War General, William Tecumseh Sherman) where 200 German Sailors were held captive. Chillicothe's history goes back to The War of 1812 when it housed 300 prisoners at Camp Bull from The Battle of Lake that were captured by Oliver Hazard Perry and his men.

Yes there's much to see and do
Indian Mound
Courthouse, and site of the first Capital in the State
Eat at Historic and Haunted Cross Keys Tavern

I'll be posting more in the days to come about The Carlisle Building, Adena, Lucy Webb Hayes Heritage Center and more.