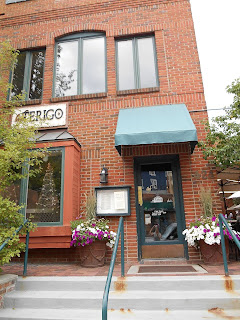 Cafe Terigo, 424 Main Street, Park City Utah.  This restaurant is always our choice for our last night vacation dinner out in Park City.  Hubby, Darling Daughter and I all love it here.  The service is superb, the atmosphere is wonderful, and food is something we look forward to each and every year we vacation here.  In fact, we've even had the same waitress several years in a row.  Having the same waitresses work at an establishment year after year speaks very well, in my opinion, of the restaurant. 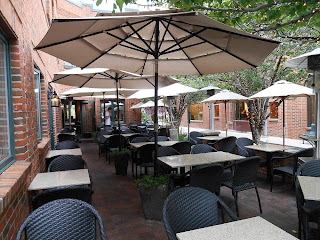 We've always chosen to eat outside on the patio that is nicely decorated and lite with white Christmas style lights.  We've been there 3 years in a row in July and while it might be in the high 80's during the day, it's quite comfortable having dinner outside in the evening. 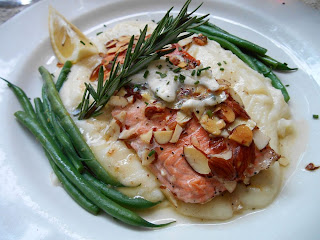 Darling Daughter had this beautiful dish.  Almond crusted Salmon and she said it was divine.  Beautiful presentation too! 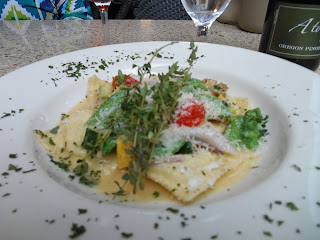 Ravioli's with a light lemon sauce and fresh veggies.......perfect for a summer meal.  I wanted to lick the plate.  Now you don't know how significant that is.  I rarely, truly hardly ever eat the whole meal; as I hate to be full.  There wasn't anything left of this awesome dish. 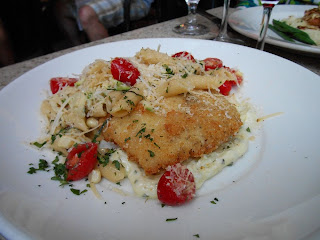 Hubby had a fish special over paste that he thoroughly enjoyed.  We brought 2 bottles of A-Z Pinot Noir Wine that paired nicely with our meal.  They do serve wine you bring with a minimal corkage fee, and or you can purchase there.

There are known for their Bread Pudding with Rum Sauce which was yummy, though a large enough portion to share.  Hubby had Tiramisu and Darling Daughter had The Trio Gelato.  We're looking forward to our next meal there when we return to Park City. 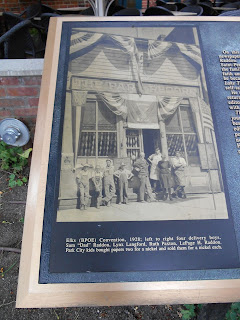 Though Cafe Terigo's is celebrating it's 25th year, the building had previously been a newspaper operation. 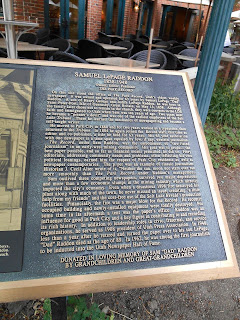 The newspaper, The Park Record was owned and operated for 63 years by Samuel LePage Raddon son of Henry George and Judith LePage Raddon.  Sam was born in 1858 in Guernsey in Great Britain and immigrated at the age of 10 with his parents, who were converts to the Mormon Faith.  His family didn't remain with the Church.

He learned his trade working in a variety of jobs in both Salt Lake and Park City, until he became the owner of this establishment.   He out lived 2 severe depressions, 3 competitive newspapers, slumps in the mining industry which caused significant financial change in the community and a fire in 1898 that burned his plant.  Even with those difficulties he continued operations of the paper for 63 years, a remarkable record.   At one point he even operated his Paper from a tent!   He retired in 1948 and turned over the operations to his son, LePage.  Samuel lived to be 89 years old dying a short time after retiring.

It's note worthy that since his family left "The Fold" business was harder as they weren't supportive.  He later, as an adult was fairly outspoken about some of "their" practices and wrote openly about them in his paper.  For more interesting information on this man, click HERE.

I highly recommend this restaurant for a special night out,  particularly recommend it for adults.
Do make reservations, as it's quite popular.  Cafe Terigo serves lunch from 11:30-2:30, then closes to prepare for the dinner service which starts at 5:30 pm.


Pop in Often, remember Menu Mondays for dining tips, Traveling Tips on Thursday, and any day for vacation destinations.
By Sandy at July 21, 2013