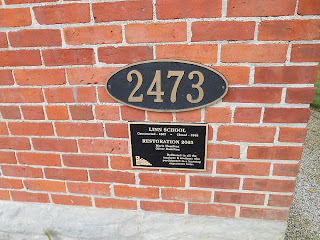 The plague gives the dates of this one room school house, built in 1897, in operation until 1942, and restored in 2003.  Reading various articles I found a bit of conflicting information regarding this one room school house.  In some articles it says the building was restored to it's 1905 status, and others said 1912 status.  Not a big difference, though I don't know which is correct. 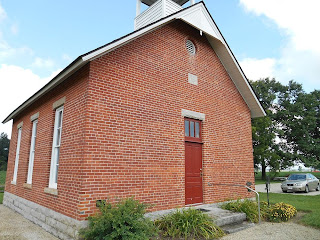 Above the door you can see (click to make any and all pictures larger) Marion Twp. Sub District #8).  Funny name for a school.  Apparently though #8 was the "official" name of the school kids who attended called it The Linn School.  There were many from the Linn family who attended the school, Linn's lived right across the street, and down the road. 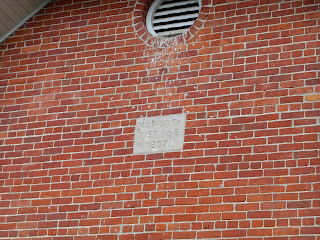 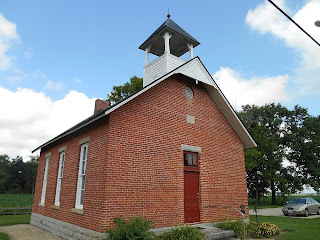 There were approximately 130 such one room school houses in Marion County back in the day to serve the rural population.  The school house in located about 4 miles north of Marion on Route #4, in Ohio.  The school was built of brick, measures about 800 square feet and served students through the 8th grade. 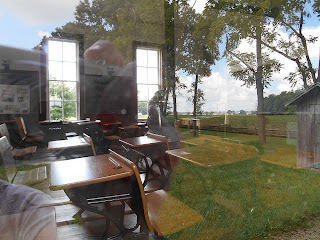 Though we weren't able to get inside, this is an attempt to photograph the inside, complete with desks and chalk board, and pot belly stove.  It's opened to the public on Sat and Sun from May to October the first and 3rd Sat and Sun of the month.  We were there on the first Sat of the month, but apparently too early in the day, as it's opened from 1-4 pm. 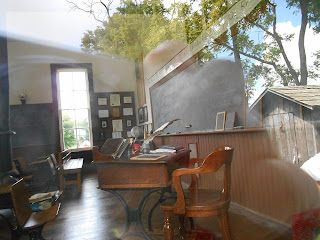 After it's closing in 1942, it sat empty and was used as a corn crib.  The Hamilton Brothers, Merle and Oliver decided to purchase it and with the help of The Historical Society restored it.  Both brothers attended this one room school house.  Merle was born Sept 29th, 1907 and attended the school from 1913-1920; while his brother Oliver born Aug 24th, 1903, attended from 1909-1914.  Merle recalls the train tracks (interurban) running right in front of the school, and in fact took the train to school. 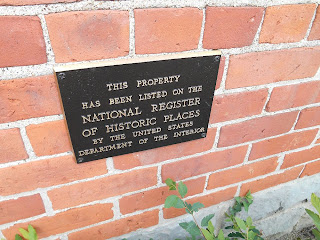 The school's been placed on The National Register of Historic Places by the Department of the Interior. 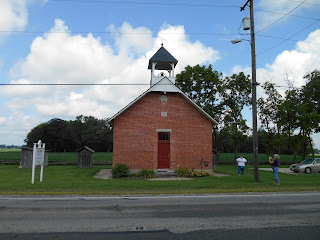 You can even see the school bell in the tower from across the street. 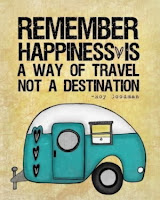 This is my happiness post for today.  The badge is link to the month long challenge for August to post what makes you happy.  Though I do love history, and to travel, the happiness I felt when photographing the above was due to spending the day with 3 of my childhood friends, Wendy, Debbie, and Pam.  It's been 50 years since we friends have gotten together.


Pop in Often, remember Menu Mondays for dining tips, Traveling Tips on Thursday, and any day for vacation destinations.
By Sandy at August 06, 2013