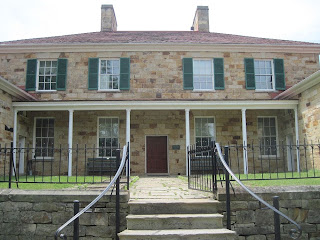 Adena, Thomas Worthington's home in Chillicothe Ohio.  This magnificent mansion was built back in 1806-1807.  A remarkable feat considering the stone mansion was built in the middle of a wilderness.  This was dense forest area, Ohio had only become a state in 1803, just 3-4 years earlier.  It's archietect, was Benjamin Henry Latrobe.  Adena is 1 of only 3 houses still standing in the United States that he designed.  He was the first American Professional Archietect.  Thomas Worthington's estate, Adena is located at 847 Adena Road, Chillicothe, Ohio  45601. 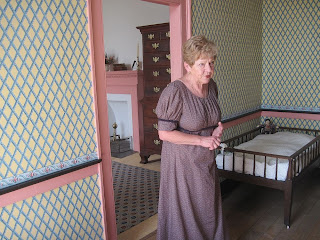 Tours can be arranged for groups, or during regular hours of operation which are April-October Wed. - Sat. 9 am til 5 pm, and Sunday 12 noon til 5pm.  Entrance fees are $8.00 for adults, less for children and seniors.  There's also the very affordable membership option of $30.00 annually for a family membership which provides other benefits.  Our tour guide was awesome, very knowledgeable. 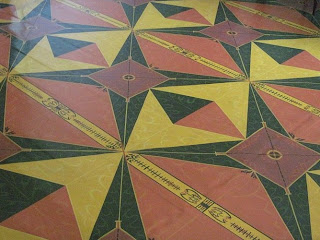 She explained how this marvelous colorful floor was made, in fact she says we could make it ourselves.  Well, that might be  a stretch.  She discussed how you could tell a private room vs a public room in such a wealthy home.  Flooring would be ornate, colorful and expensive looking in the public areas, and plain and without carpet in the private family rooms.  This floor is the first thing you see as you enter. 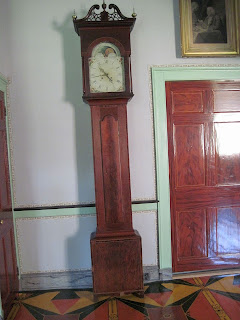 Followed by one of the original Worthington piece, the clock.  Which still works.  Wood areas in public places would be real vs faux painting in the more private areas.  The door you see would have been used by servants not quests and is therefore not real.  It's faux paint.  Hard to believe but there were many examples of faxu painting through out the mansion.  Faux painting is not new! 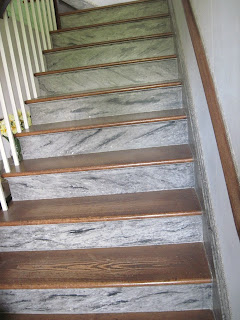 Speaking of faux painting....if we hadn't been told, we would not have known these stairs weren't real marble, they surely look it. 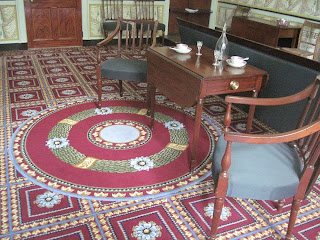 The main drawing room where quest would have been entertained, notice the carpet?  Story behind the carpet is, Thomas was on a trip, saw the carpet and didn't know how much to buy, you see he didn't have his cell phone fully charged to call home and ask the Mistress of the house, so he bought ALOT.  This carpet shows up in lots of rooms as a result. 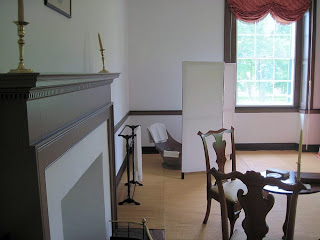 Some of the pictures are a bit dark.  Though they don't mind if you photograph (which pleased me, as some historic homes don't permit it), you're not allowed to use your flash, thus some darkened grainy pictures result.  Left corner...the bathtub, a priced possession and one of the other original Worthington Family piences. 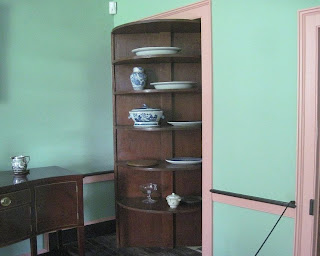 There are several of these marvelous turn style shelving units in the mansion.  The whole unit pivots on a center point and can move from the kitchen or private areas into the entertainment areas where many great people visited.  Thomas Worthington was teh 6th governor of the state, and one of the states first United States Senators.  Much business was transacted at his estate.  Many important and influential leaders were welcomed here at Adena including President James Monroe, and the great American Indian Leader, Tecumseh. 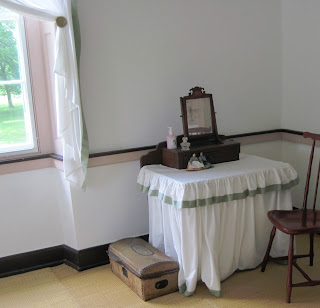 The little antique mirror on the dressing table is another of the original Worthington Family possessions.  This beautiful home has been restored twice by the Ohio Historical Society, once in 1953 and again in 2001.  It currently is renovated as close to it's appearance during Worthington's time as possible. 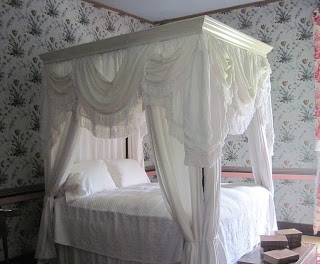 One of the beautiful canopy beds. 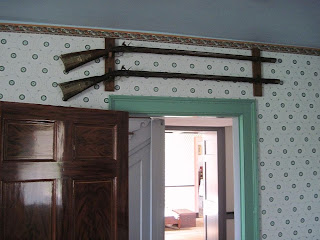 Long riffles above the door to Thomas's office are original pieces. 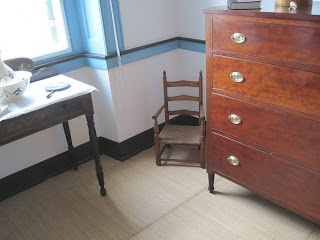 As is this little rocker. 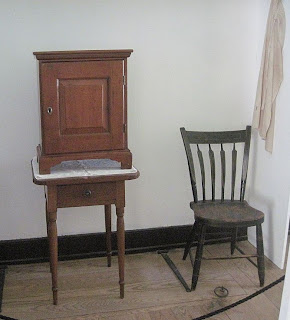 Off the kitchen in what would have been a storage area is a locked herb cabinet.  Herbs were important for medicinal purposes, as well as for cooking.  Herbs weren't cheap and therefore the cabinet was kept locked.  Documents tell us that there was unrest between the women in the household with regards to whom held the keys to the all important cabinet.  Apparently that privilege fell to the oldest daughter when Mrs. Worthington wasn't around.

This beautiful estate comprises 2,000 acres of land, several out buildings, and the mansion.  It is available for private functions such as weddings and special fundraising evenings.  The next special event will be in September of 2013, a murder mystery.

I highly encourage you to tour Adena.  It's a fascinating and well preserved historic landmark.  I've toured the house 3 or 4 times from childhood to now and am always amazed at what additional information has been learned from historic documents.  There's a large garden area you can also tour.  That however is another post.


Pop in Often, remember Menu Mondays for dining tips, Traveling Tips on Thursday, and any day for vacation destinations.
By Sandy at July 06, 2013