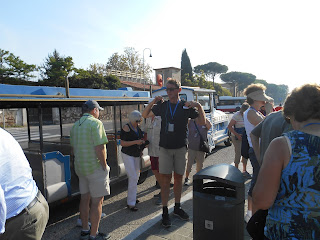 Day 6, Pisa, and Lake Maggiore.  Our itinerary for the day says  stop at Pisa for the Leaning Tower from which Galileo is said to have conducted experiments on velocity and gravity.  See the splendid cathedral and baptistery decorated with mosaics.  Journey past the marble quarries T Carrara, used since the time of Ancient Rome.  Travel through the Apennine Mountains to the fertile valley of the River Po. and continue to your lakeside resort on beautiful Lake Maggiore.

The town of Pisa is one of the areas where tour coaches aren't permitted.  We toured several areas where the coaches have to park some place outside the city, and tourist need to walk in, or find other transportation.  From memory, believe this was the 2nd time the coach had to leave us outside city limits.  Partially due to the distance, and perhaps because of our lady in the wheel chair, Vivian; arrangements were made to ride these little trains into the area where The Leaning Tower of Pisa,  and Cathedral were.  We weren't the only tour group here that morning, so the trains must be common place. 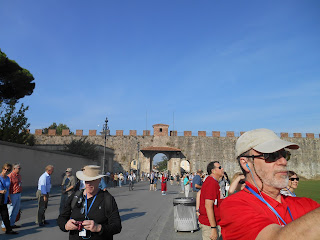 And even after you leave the train outside the walled area, you still must walk to your actual destination.  ERnie in right foreground. 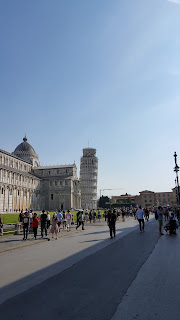 As you approach, you see the Cathedral on your left and The Leaning Tower beyond.  They look connected in this picture, but they aren't.  It's just the distance.  But, comparing it to the building near it, you see better how much it's leaning. 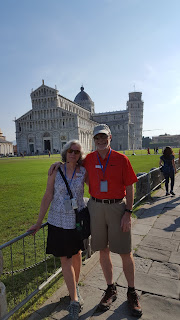 A different view where were almost in front of the Cathedral, gives you a feel for the size. 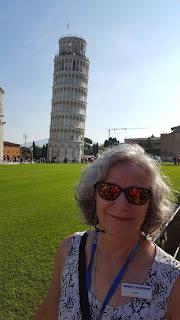 We considered briefly doing the shot where you find the right spot and look like you're holding it up, but the line of younger folks waiting to do that...we moved on.  The Leaning tower is the bell tower for the Romanesque Marble Cathedral, built in 1372.  Even at the time it was built, it leaned.  Later due to it leaning so much Italians were afraid it would fall over, devices were used to secure it.  Over time it was beginning to straighten the tower......which would ruin the tourist attraction, so alterations had to be made to allow it to continue to lean. 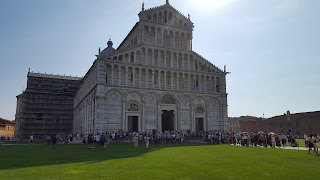 The Cathedral was beautiful even from the outside, and as you can see the line to enter was long, so was the line to buy the ticket to enter.  Knowing our time table here, we elected to walk around the community instead.  I don't believe anyone in our group made it inside the Cathedral.  There was also a long line to use the bathroom, which was one of the many paid public toilets we encountered during our travels. (more on bathrooms in a later post) 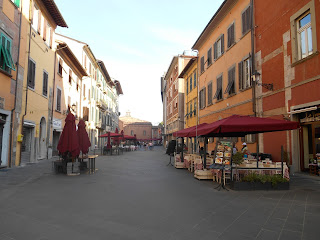 One of the side streets with shops and places to eat.  We were there early enough, many weren't yet open for the day. 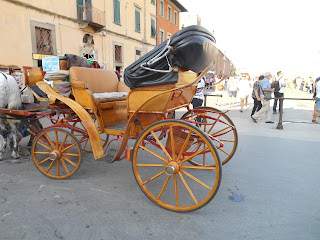 This was gorgeous.  Look at the wooden wheels!  I couldn't read the sign posted with it, but we assume it's for hire to site see from. 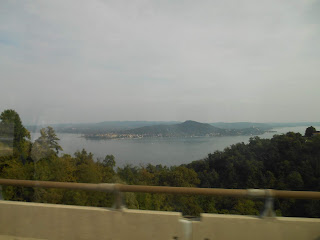 Some views out the window of the coach. 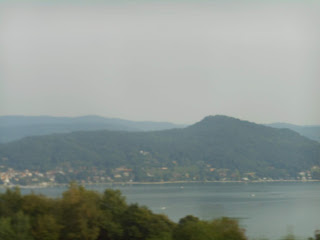 We're approaching Lake Maggiore.  We did pass the marble areas mentioned in the itinerary for the day.  It was visible from the coach, but not such that a picture was obtained.  A very steep hillside where marble was selected and the difficulty of getting the marble to the artist/builder etc was discussed.  We could see very primitive roads off in the distance.

**Pop back in for Lake Maggiore.