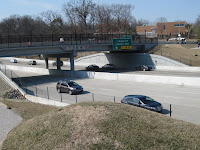 Exit 34A, Skinker and Clayton Roads is the spot. The walk bridge you see is at the intersection of Tamm and Oakland Avenue's in St. Louis, Missouri. Some will argue this is Dogtown, some will say it's the far southern end of Forest Park. At the very least it is were the two neighbors join and come together. 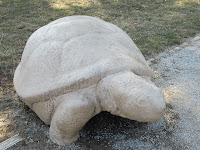 And who could resist climbing on such a large repile? Seriously, there are children of all ages here. Climbing, walking, photographing.

Funny the small children didn't seem to be afraid of this large creature with it's mouth opened. These fantastic cement sculptures are the work of a local artist, Robert Cassilly on land donated by Mrs. Sonya (Sunny) Glassberg. 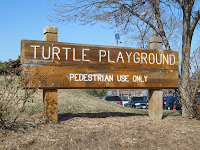 And yes, the park is in-fact named Turtle Playground. In August of 1996 it was officially opened. There's parking on the street and plenty of place for bikers, walkers and those with strollers on a sunny afternoon. You could try your hand at identifying a Snapping Turtle, Soft-Shelled Turtle, Mississippi Map, Box Turtles or a Stink Pot as they all reside here in cement form. There's even a long snake which makes a place to sit, or climb along side the walkway.

With the covered walkway over the freeway there's easy access to the park. Though I must admit this is the first time we've actually visited the park; we've seen the large turtles from the freeway many many times in our travels there. Take time, get off the freeway and enjoy it; it's well worth the effort.

The park is open daily til 10 pm and is free!